This report summarizes available large scale test data for wood structural panel conventional construction wall bracing. Several 4-ft long wall tests are included, but the majority of test data is taken from tests where wall lengths are at least 12-ft. The purpose of assembling this information is to help evaluate and determine the strength of wood structural panel wall bracing.

Additionally, the APA-BSSC report shows that IRC-compliant OSB braced wall lines with GWB attached, in accordance with the IRC (i.e. screws spaced 16:16), provides an average ultimate lateral resistance capacity of 383 plf. As can be seen in Table 2 below, OSB with GWB has an IRC allowable design value of 192 plf (383 plf divided by 2 per SDPWS).

The APA-BSSC report of IRC-compliant braced wall line assembly tests suggest that the application of GWB is only adding 32 plf (383-351= 32). 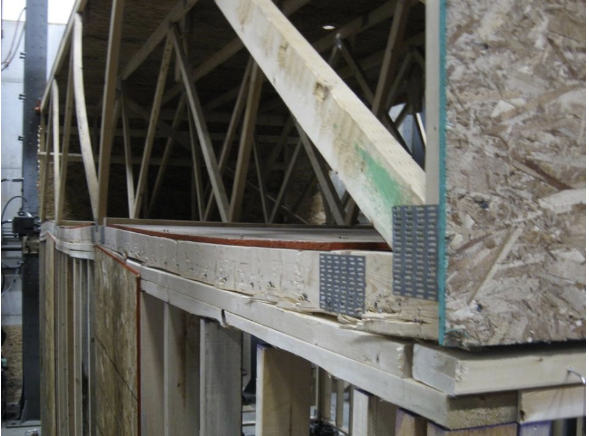 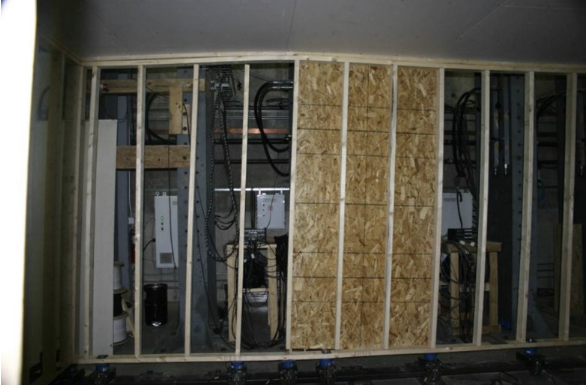 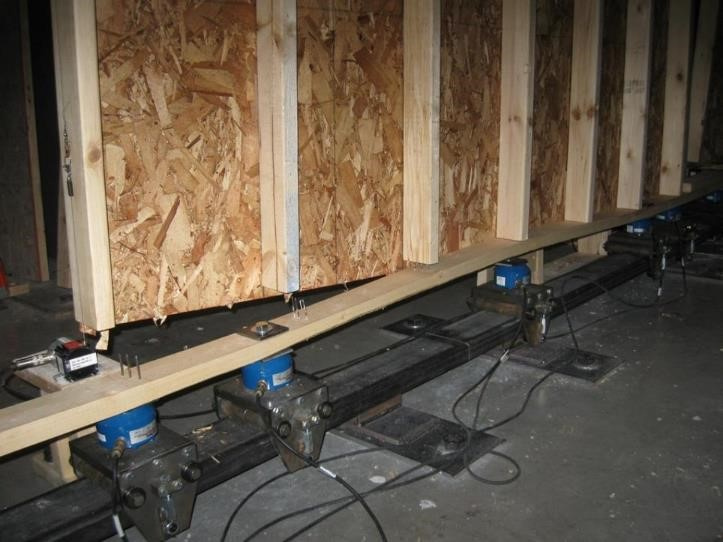 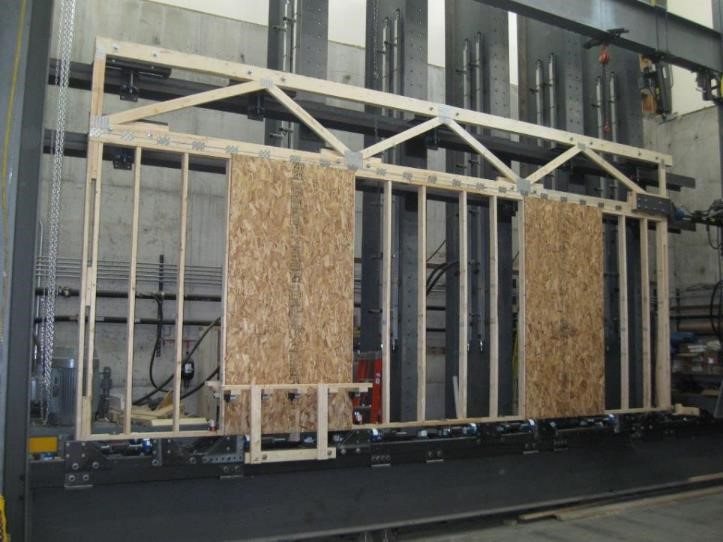 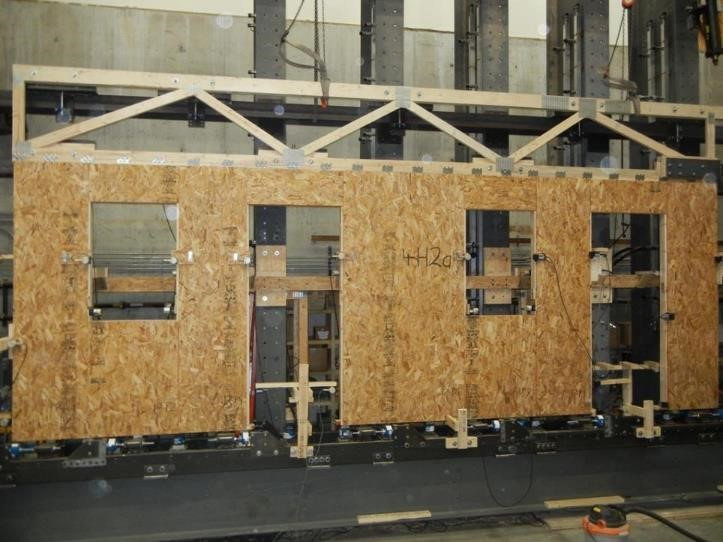 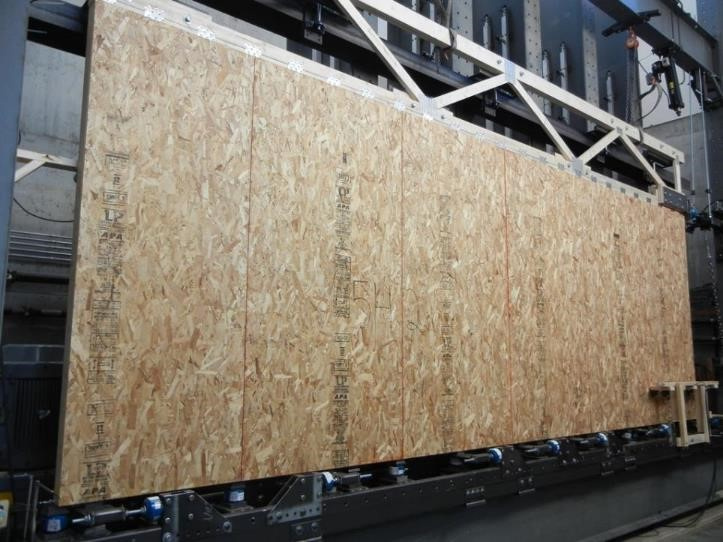 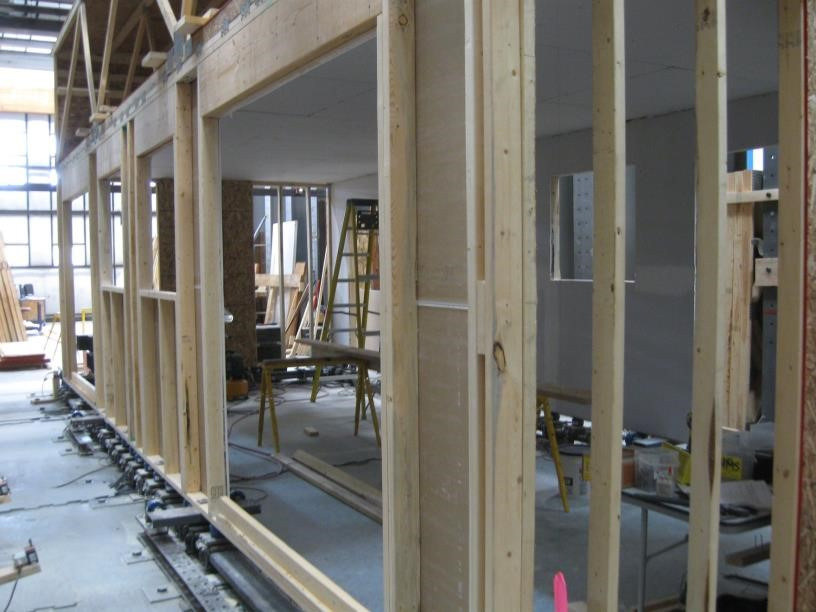 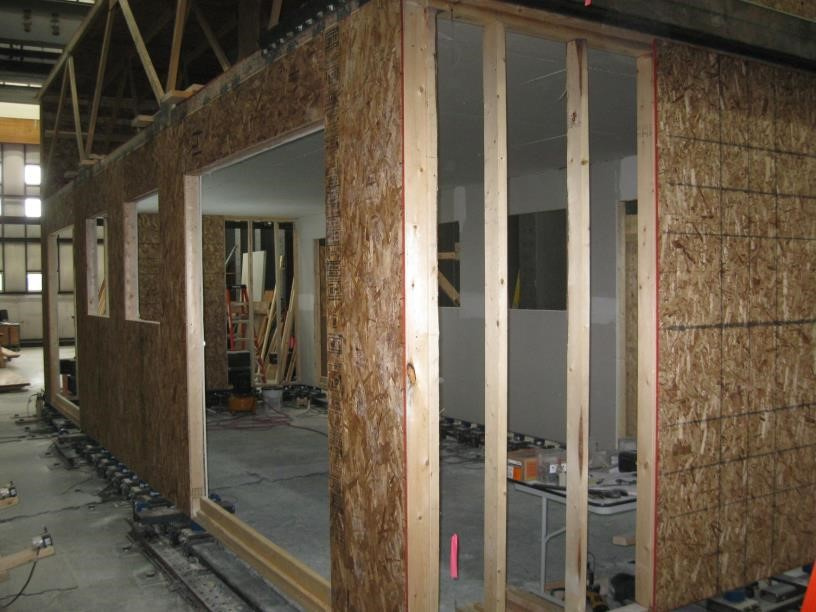 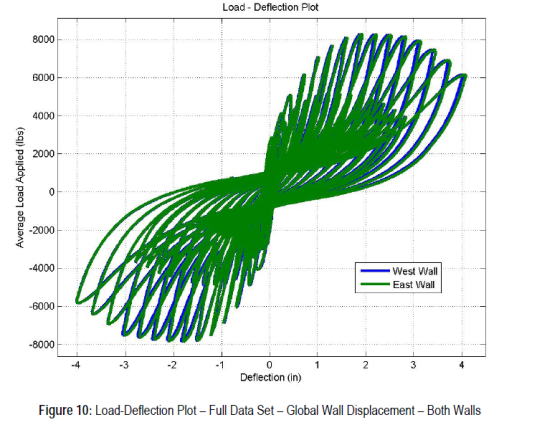 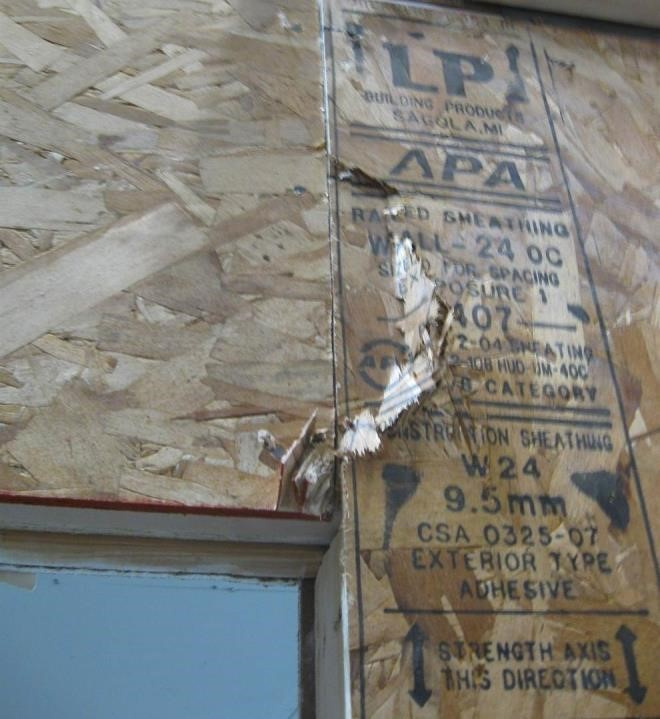 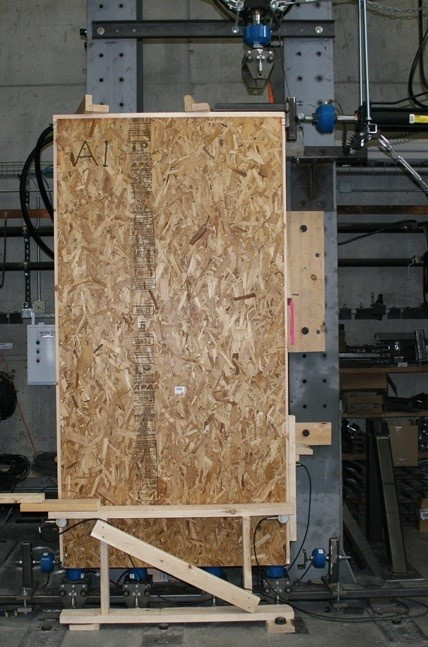 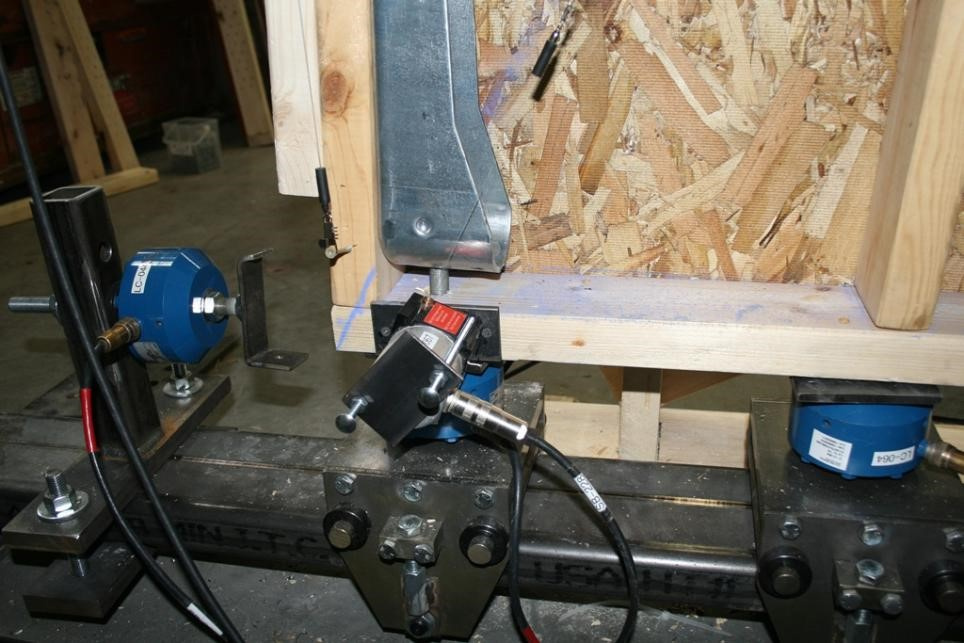 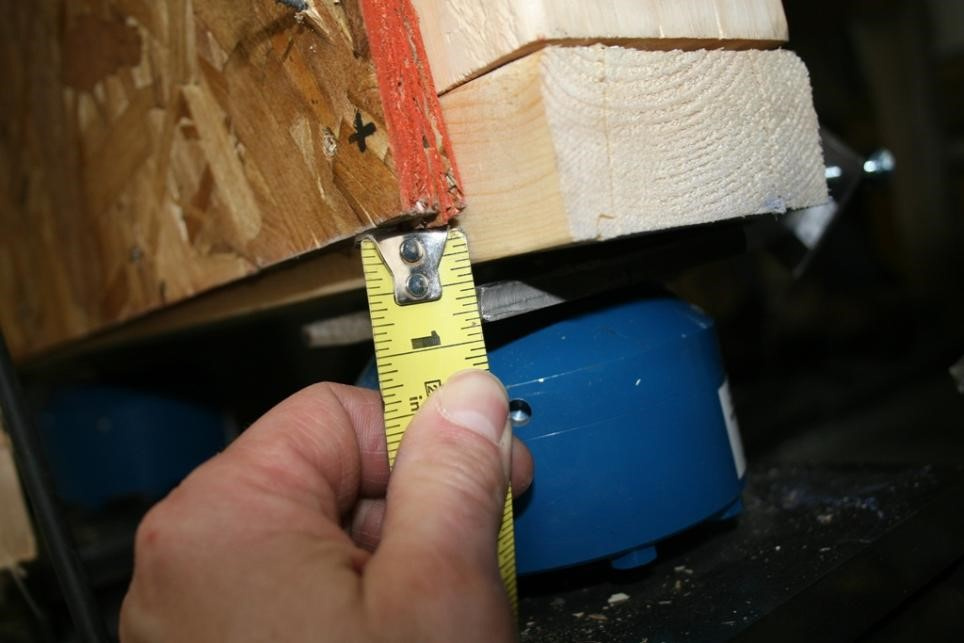 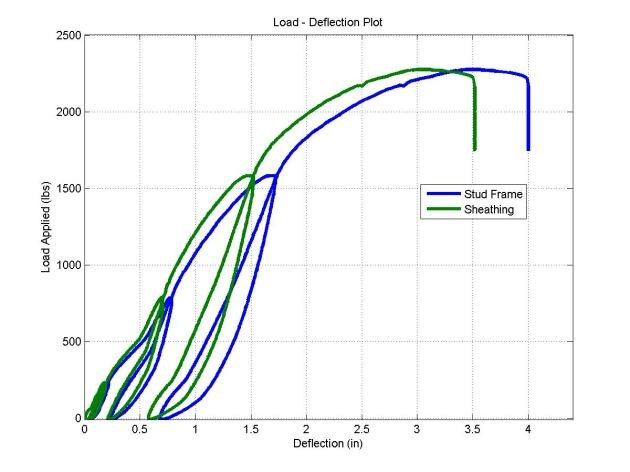 See Appendix A for full-size images.

In the IRC code compliant OSB braced wall testing, the SBCRI test minimum was 334 plf and averaged 374 plf. This testing confirms the APA-BSSC report generated OSB capacity of 350 plf. Please see appendix A for photos of the SBCRI testing.

Table 4 below provides data from SBCRI testing of IRC-compliant OSB braced wall line with interior GWB installed. The OSB testing yielded a 102 and 141 plf contribution for the GWB when screws are spaced 16:16. Testing was also performed on proprietary engineered fiberboard sheathing where the GWB contribution was 110 plf. SBCRI testing confirms the APA-BSSC report generated capacity of 383 plf when OSB has interior GWB attached.

Given the testing performed, it is reasonable for SBCRI to use an interior GWB contribution of 100 plf, when attached using screws spaced 16:16. This GWB addition to OSB is for code compliant IRC braced wall lines where OSB is applied as isolated panels (i.e. non-continuous 4x8 sheets using anchor bolts as hold downs).

Given the foregoing set of undisputed facts, IRC code compliant walls are using a systems effect factor (i.e. a "standard factor for equivalency") of roughly 1.8 for walls sheathed with OSB only. (600/334 using the minimum OSB performance to be conservative is 1.8).

Additionally, IRC code compliant OSB walls with interior GWB attached are using a "standard factor for equivalency" of roughly 2.19 (840/383) if APA-BSSC report generated numbers are used and 1.8 (840/450) for walls tested by SBCRI. It is an SBCRI opinion that 450 plf most accurately reflects the lateral resistance for a braced wall line sheathed with OSB and interior GWB (840/434 as the minimum OSB performance is 1.9).

APA, the American Wood Council (AWC) and NAHB opposed this code change proposal, and the IRC committee denied it.  The  APA-BSSC report stands undisputed by APA and confirmed by SBCRI testing, which means that the testing is correct. This also means the IRC still has “standard factors for equivalency” embedded in the building code and codified into law. However, these "standard factors for equivalency" are not explicitly defined by the IRC, instead they are implicitly used.

On January 3, 2013, SBCA attended a meeting with APA to address OSB design values and “standard factors for equivalency,” which clearly exist in the law. Mr. Ed Elias, president of APA attended the meeting and responded with via letter to SBCA, where he discusses the concept of “standard factors” for “product equivalency.” Specifically, he wrote:

"APA staff has reviewed the information that was shared with us and we have the following comments and concerns:……….

We believe that a major goal for the SBCA position is to provide a cost-effective engineering solution to their membership and as such this goal serves the SBCA membership well. However, by establishing standard factors in which product equivalency or system performance are applied generically, an unintended consequence may be that non-wood products (e.g. foam sheathing) gain an advantage and supplant traditional OSB market share.

This is not in our Association member’s best interests."

SBCA fully understands APA’s desire to have a competitive advantage codified into the law (i.e. IRC). All sheathing manufacturers would like this to be the case for their products.

SBCA has provided, and will continue to provide transparency to the market with respect to “standard factors of equivalency.” By law, these factors can be used to establish IRC compliant OSB equivalency for any braced wall line product including OSB.

Knowledge of the APA-BSSC report test data, and how OSB braced wall line lateral resistance is codified, provides code officials and manufacturers with the knowledge and tools needed to use IRC “standard factors of equivalency.” The goal of any free, fair and competitive market is to use accurate design values and any known “standard factors of equivalency” so that a fair playing field is provided. In their 2007 report to the BSSC, APA acknowledges this should be done through their "bracing spectrum" concept generated through their own analysis. 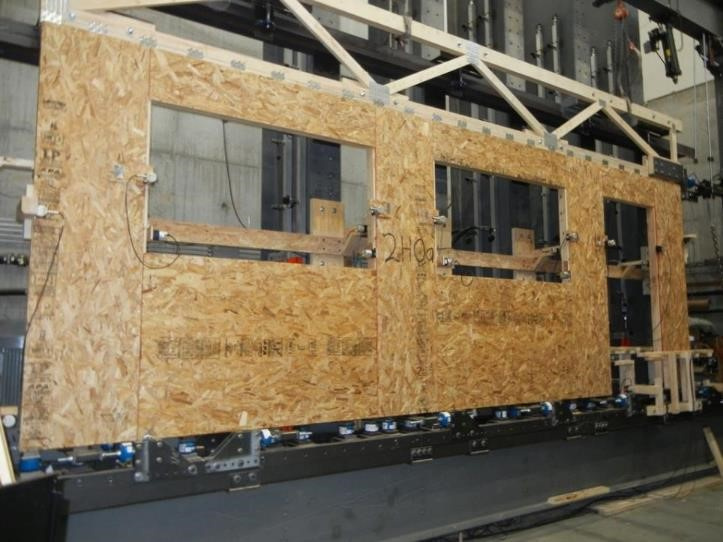