An update of a National Institute of Building Sciences study on benefit-to-cost ratios of hazard-mitigation investments has determined an 11:1 BCR over time for jurisdictions that have adopted model building code updates versus those that still use codes from the 1990s. The study also found a 4:1 BCR for investments to improve hazard resistance in utility and transportation infrastructure. 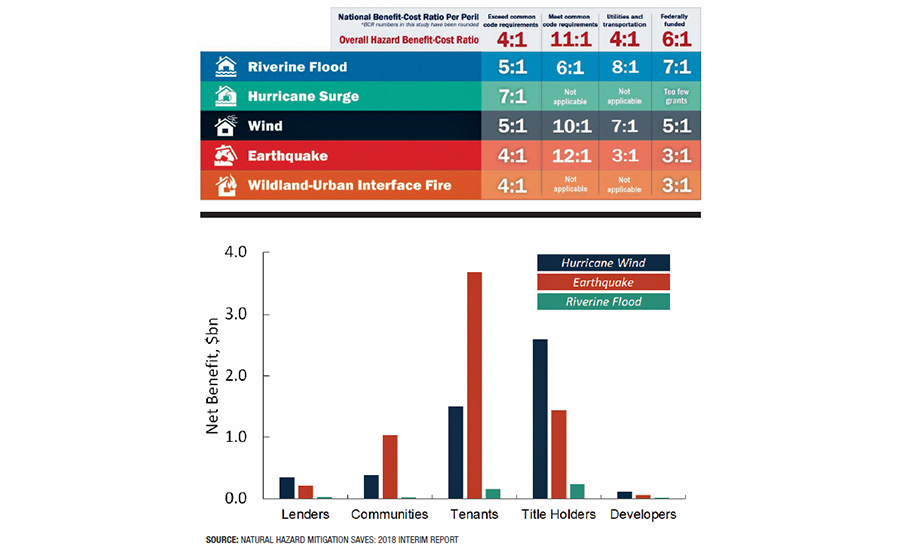 The 11:1 BCR for communities that adopt the latest model codes is “remarkable and represents a huge return on investment,” says Keith A. Porter, a research professor at the University of Colorado, Boulder, and the principal investigator for the NIBS study, “Natural Hazard Mitigation Saves: 2018 Interim Report.” NIBS released  the report on Jan. 8 at its Building Innovation 2019 Conference & Expo, held Jan. 7-10 in Washington, D.C., and attended by 330 people.

NIBS and the International Code Council are trying to make a case for states and local jurisdictions to adopt the latest model codes, developed by ICC. “Communities that lag the rest of the country in code adoption will ultimately pay in terms of the health, safety and welfare of the public, of businesses, of visitors and of the community’s future vitality,” chorus NIBS and ICC in a joint statement. “Strengthening codes for natural hazard disaster mitigation makes economic sense,” the groups maintain.

“We knew there was a benefit to invest  in mitigation but, prior to the study, we didn’t have a way to quantify it at a national level,” says Ryan Colker, until December a NIBS vice president and currently executive director of ICC’s Alliance for National Community and Resilience.

The 498-page report expands on a 344-page 2017 report. Primarily funded by the Federal Emergency and Management Agency, both reports examine hazard mitigation investment strategies for earthquakes, wind, hurricanes, river floods and wildfires at the urban interface. The 2017 study found a 4:1 BCR for investments that exceed select provisions of ICC’s 2015 International Residential Code (IRC) and International Building Code (IBC) and a 6:1 BCR for dollars spent through mitigation grants funded through federal agencies (ENR 1/22/18 p. 8).

In addition, designing new buildings to exceed the 2015 IRC and IBC would result in 87,000 new, long-term jobs, adds NIBS.

The report offers data on the varying benefits to lenders, communities, tenants, title holders and developers. “The benefits are spread over the community and a whole set of stakeholders,” says Philip Schneider, NIBS Multihazard Mitigation Council director.

This spring, NIBS expects to release BCRs for housing mitigation retrofits. Work is funded by the Dept. of Housing and Urban Development. That will add up to $2 million spent on the study, which is a sequel to one released in 2005.

“We have never quantified the BCRs of the federal activities and as a consequence, Congress has under-invested in them,” says Porter.