Entekra, an automated off-site wood framing company, debuts its new Modesto, CA manufacturing plant. The new facility will be able to crank out some 3,000 home frames a year.

At Modesto’s newest manufacturing plant, progress sounds like 11 nails being fired in one second.

Construction company Entekra, which specializes in automated off-site wood framing for homes, showed off its new $35 million headquarters and facility in south Modesto on Monday. Company officials gave city and county leaders a tour of the 200,000-square-foot plant on East Whitmore Avenue, previewing its capabilities before it starts full production early next year. 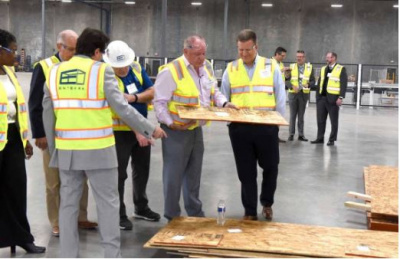 Once complete, it could help the region build homes faster while cutting costs for developers and home buyers. And Entekra CEO Gerry McCaughey boasts that it will be the most technologically advanced construction-related factory in North America.

“We can assemble a building in less than a third of the time that it currently takes to stick frame,” McCaughey said. “But, I should say, it’s to a much higher quality because given the level of the automation that we have here, our tolerances are extremely tight. They’re almost up to aircraft factory level tolerances.”

The plant can crank out wood frames for interior and exterior walls and subfloors for single-family and multi-unit homes. Once fully operational, it will be able to build 3,000 home frames a year. Limited production will begin later this month, with full production likely to start as soon as late January.

The plant currently has about 80 employees, and by the end of 2020 should be fully staffed with around 250 workers.

“It’s an amazing facility they’re putting together here,” said Modesto Mayor Ted Brandvold while touring the plant. “The technology involved and what they’re bringing to the construction industry in our city and region will be a boost to our cities and companies involved in construction here.” 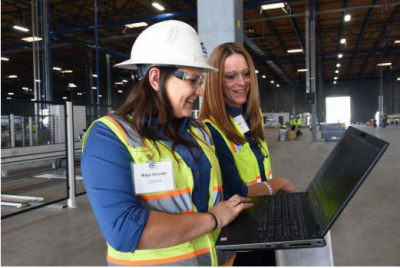 Opportunity Stanislaus estimates that the total economic impact of Entekra locating its headquarters in the county is $158.6 million and that the company’s ongoing business will have an additional annual impact of $97 million.

Entekra started production in early 2017 in a pilot manufacturing plant in Ripon. The smaller facility has a capacity for 500 home frames a year, and has about 60 employees. That site will remain open and active when the new plant comes to full capacity as a secondary production facility.

The company received a $45 million investment to construct its second, larger, fully automated factory in 2018. Then earlier this year, it was announced that Entekra had selected the site on East Whitmore Avenue in Modesto, next to the new G-3 plant and former Post Foods plant, for its new headquarters and manufacturing plant.

The facility has about 60 percent of its equipment installed. The rest should be arriving in December and early January. The equipment includes three exterior wall-panel production lines, which each can fire 11 nails in one second while assembling frames as large as 37.5 feet long. 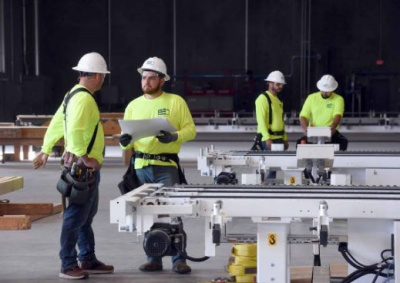 All of the wood frame elements for a 2,500-square-foot home can be finished in about three hours in the plant, and then assembled in about a day on site with a crane, said Gary Prunty, Entekra’s senior vice president for manufacturing. He said traditional on-site wood framing takes about 15 to 19 days to finish.

Recently named Manufacturer of the Year by the National Association of Home Builders, Entekra has already been making inroads with regional development companies and builders. Automated off-site wood framing has long been the norm in Europe, but only recently been introduced to many U.S. builders.

Entekra plans to build another similarly sized off-site construction manufacturing plant in Southern California in about a year. A site has not been confirmed yet for that project.

Since launching in the Central Valley, Entekra has worked on home development projects with Beazer Homes in Sacramento and Lake Plumas, Lennar Corporation in Tracy, and Van Daele Homes in Lathrop and Castro Valley.

McCaughey started Entekra after founding and running a successful automated wood-framing company in Ireland for over 15 years. When he sold Century Homes in 2005, it had grown to be the largest off-site builder in all of Europe.

If he can do the same thing for Entekra and Modesto, it would be quite a boon to the area indeed. Though it may still be a tough sell to change the arch to “Water, Wealth, Contentment, Homes Built Really Quickly.”

Posted on December 5, 2019 in Press Releases