Originally published by the following source: SBC Magazine — December 2, 2019
by Kirk Grundahl and Sean Shields, with contributions by SBCA staff

The American Lumber Standard Committee, Incorporated (ALSC) has approved definition changes to the terms “design values” and “grade.” These are important for component manufacturers, and all users of structural softwood lumber, to know.

Chairman Brodie asked Mr. Jourdain, the chair of the PS 20-15 Review Task Group, to report on the task group’s activities. Mr. Jourdain reported the task group had met on June 13, 2019. At this meeting, the task group reviewed the comments submitted by John Grenier, Vice Chairman of the General Requirements Subcommittee of the National Council of Structural Engineers Association (NCSEA), during the public comment period. NCSEA’s concern regarding PS 20-15 can be viewed below in their submittal memo: 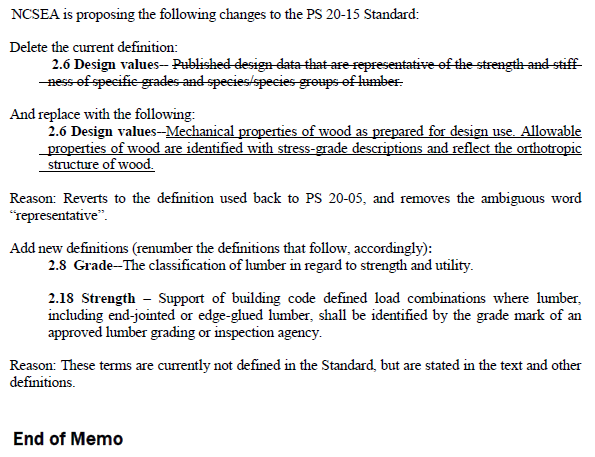 At the June meeting, the task group reviewed the NCSEA proposal and considered editorial changes submitted by Linda Brown, an engineer at the Southern Pine Inspection Bureau (SPIB). During the June 13 meeting, additional suggestions for clarifications of language were also considered.

Mr. Jourdain indicated that based on NCSEA’s comments, along with comments made by the Western Wood Products Association (WWPA), the following two revisions were recommended by the task group to PS 20-15.

Mr. Jourdain made a motion that was seconded by Mr. Ehrlich that the Standing Committee endorse adoption of the recommended changes to PS 20-15 as proposed by the PS 20-15 Review Task Group, as well as any non-substantive changes required by the Department of Commerce during their editorial review. The motion carried unanimously and these are now the new definitions to use and reference.

SBCA appreciates NCSEA taking the initiative in proposing much needed improvements to PS 20-15.

For more information on the PS 20-15 standard, please review the following sources:

Posted on December 2, 2019 in Most Popular Articles, Housing & Construction