The Truss Company has announced that construction is underway for their eighth truss plant, located in Centralia, Washington. Company president Roger Helgeson says, “This new plant allows us to add needed capacity to our organization and close the gap between the South Puget Sound and Portland markets. The addition helps to achieve our goal of seamless service and manufacturing from the Canadian border through Northern California along the I-5 corridor. We expect the new facility to be up and running next summer.”

For more information on The Truss Company’s plans for the new Centralia facility, read the article below:

The Port of Centralia has approved the conditional site plan for an 80,000 square-foot manufacturing facility at it’s Park II development to be occupied by The Truss Company as soon as next year. 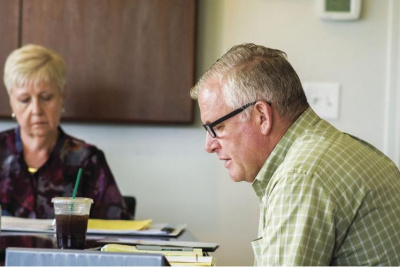 Port of Centralia Executive Director Kyle Heaton summarizes a report on the financials of the port for 2018 during a meeting Wednesday afternoon. Will Rubin/wrubin@chronline.com

The Truss Company estimates the facility will have 60 employees working in two shifts, according to a press release sent out by the Port of Centralia, with the potential for further expansion.

Kyle Heaton, executive director of the Port of Centralia, said Wednesday that he’s under the impression that The Truss Company wants to be up and running in Centralia by mid-2020. The Truss Company currently manufactures roof and floor trusses at seven West Coast facilities from Sacramento to Spokane and counts about 400 employees among its workforce.

“We first got word of this from Tarragon sometime in mid-June,” Heaton said. “They’re on such a fast track, there wasn’t a long courting of them or anything like that. Tarragon had them in tow and wanted to break ground this summer. (Tarragon) built Michaels’ in under a year and that’s more than 680,000 square feet, so I have every confidence they’ll be able to get this done in that timeframe. I don’t see any reason why they shouldn’t be able to.”

Truss Company officials declined comment when contacted Wednesday morning, but said they would be willing to answer questions at a later date. The company began operations in 1985 in Tacoma and moved to Sumner in 1995. It also has facilities in Burlington, Spokane and Pasco, along with two in Oregon and one in Sacramento.

Heaton expects the Port of Centralia to announce additional projects on its industrial properties sometime in the next month or two. Construction of a $100 million grocery distribution center run by United Natural Foods Inc. in Park I is nearing completion. That facility is expected to employ at least 350 people when running at full capacity.

“We are very pleased to welcome The Truss Company to the Port of Centralia,” Port Commission President Julie Shaffley stated in the press release. “We appreciate the work Tarragon has done to attract this quality company and are confident that Tarragon will construct another attractive site as they have many times before in the Port of Centralia. The Port looks forward to assisting Tarragon complete this important project.”