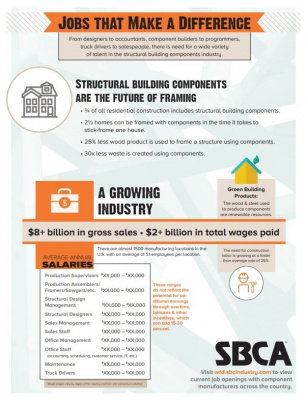 One of the many hats Matt Chilton wears at Apex Truss is HR and workforce development and, as it is for many in this industry right now, it’s a hat of the ten-gallon variety. “I’ve been tasked with getting in the door at local schools to start a pipeline,” says Matt. “This involves showing students that there is opportunity in manufacturing to move from assembly to design, etc.”

Matt started with Northern Neck Tech Center, the closest trades high school to their relatively remote location in rural Warsaw, Virginia. He says the Tech Center buses students in from five area high schools, some of which are more than an hour away. “We got tied in with the Tech Center last May,” says Matt, which led to Apex hosting tours with a few dozen students from their carpentry and engineering programs over the course of the past year. “We got some 2018 summer hires who came back this summer working in the plant.”

This past spring was Matt’s first opportunity to participate in the Tech Center’s annual career fair. He started by reaching out to SBCA staff in March to learn more about what the association had available to help make his time at the fair fruitful, and staff provided links to a variety of resources. Matt decided to use this editable template to communicate the opportunities and wages in his company. He also chose to loop the video, Structural Building Components Industry: A Place for You, A Place that Matters, in Apex’s booth. In addition, Matt says he took some trusses from their yard to help explain to students what a truss is and how it’s made.

Matt estimates he talked to 40-50 students at the job fair. “Our ‘Now hiring at $11 per hour’ sign and the video brought them over,” Matt explains, opening the door for him to connect with each student and explain more about the components industry. “It was a relatively small group, but the advantage to that is the chance to make a real connection with each student. We are sitting there offering them an opportunity in the local community, trying to plant a seed about what we’re offering so that as people come up and others ‘age out’ we have that pipeline going.”

As Matt continues to develop “a really good relationship with the carpentry program teacher” and stays active and visible in his community, he is seeing some of the seeds start to take root. “A few weeks ago I went into town to grab a bite to eat and one of the students from the career fair came up to me and asked if I worked for Apex,” says Matt. “I remembered him from the fair and asked if he was still headed to school to play football in the fall. He was surprised that I remembered that little bit of info about him, but that was one of the nice parts about a smaller career fair. He asked if we were still hiring and if it would be okay for him to send a friend of his over for an application.” Matt reports that Apex had three new applications that week, one of which he attributes to the student who remembered him from the career fair.

“Being there gets the word out into the community,” says Matt. “Our applications have picked up just because we were out in the public sharing where we are, what we do, and that we’re hiring.” Matt says they’ve even had parents and friends of students at the fair came in and filled out applications. “These folks are looking for opportunity and that’s what we want to provide.”