WTO: USDOC Needs to Conform to Obligations Under Anti-Dumping Agreement

The key provision that the WTO was evaluating, with respect to the U.S. claim of lumber being dumped by Canada into the U.S. market, is as follows:

2.4  A fair comparison shall be made between the export price and the normal value. This comparison shall be made at the same level of trade, normally at the ex-factory level, and in respect of sales made at, as nearly as possible, the same time. Due allowance shall be made in each case, on its merits, for differences which affect price comparability, including differences in conditions and terms of sale, taxation, levels of trade, quantities, physical characteristics, and any other differences which are also demonstrated to affect price comparability.(7)

2.4.2   Subject to the provisions governing fair comparison in paragraph 4, the existence of margins of dumping during the investigation phase shall normally be established on the basis of:

A normal value established on a weighted average basis may be compared to prices of individual export transactions if the authorities find:

The key concept for the WTO evaluation is defining what is a “fair comparison.” The USDOC used the “Differential Pricing Methodology” to examine whether the export prices were set in a manner that would be defined as unfair. 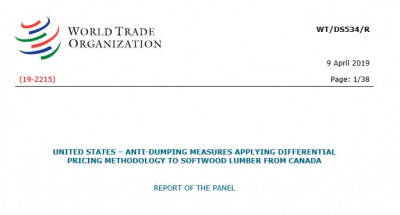 The WTO arrived at the following conclusions:

Given that the US did not demonstrate a “fair comparison” in its evaluation methods, a WTO summary conclusion follows; to the extent that the USDOC analysis is inconsistent with the Anti-Dumping agreement, the USDOC has nullified and impaired benefits of that agreement accruing to Canada. In other words, the benefit to Canada would be a finding of “no dumping exists.” From these conclusions, the WTO recommends that the USDOC bring its assessment of a “fair comparison” using its “Differential Pricing Methodology” into conformity with USDOC obligations under the Anti-Dumping Agreement. (Paragraph 8.3 and 8.4 of the WTO report).

Simply put; the WTO says the dispute playing field tilted toward Canada but the US can conform to the Anti-Dumping rules and still win. Furthermore, Canada has no “get out of jail” free card.