OSB Bracing Design for IRC? APA & AWC Say “Not Sure”

The American Wood Council (AWC) and APA know very well that in the International Residential Code (IRC) resistance to lateral loads is hard to quantify exactly. Why? Because in the IRC, the bracing provided is prescriptive, meaning braced wall lines are not “formally designed.” In a presentation created by the American Wood Council, they state that IRC wall bracing is a question mark. (See graphic 1). 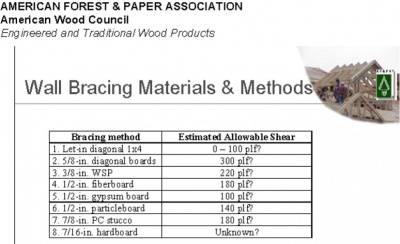 Graphic 1: Copy of a table from the AWC presentation that shows the estimated allowable design values for various bracing types found in the IRC and the market. Click to enlarge.

This presentation restates this concept as follows; “This is a relatively formal way to say that we’re not sure exactly what the resistance to lateral loads are being provided by prescriptive bracing. We know from experience that it works under limitation of conventional construction. However, since the wall isn’t formally designed and it lacks elements of a shear wall, such as connections to the foundation or floor, its hard to quantify the resistance to any exact degree.”

Mr. Ed Keith of APA created "Appendix B" for a January 3, 2013 meeting with SBCA, which can be seen in graphic 2. For more detail, please review  this January 24, 2013 letter recapping the APA meeting. 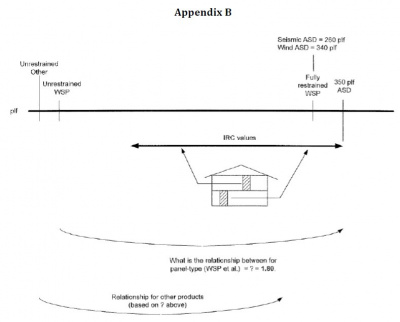 What the above graphic is saying is that the IRC has a range of wood structural panel (WSP) or OSB lateral resistance values: 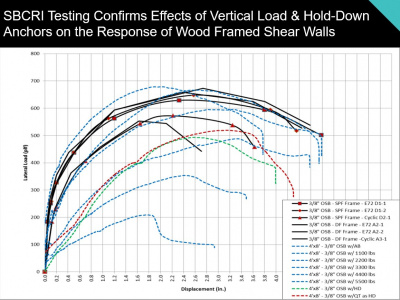 This graphic at right (click on the image to view a larger version) provides the following insight regarding the allowable stress design of WSPs (ultimate strength values in parentheses):

In our January 3, 2013 meeting with SBCA, Dr. BJ Yeh stated the IRC performance of OSB shown in Graphic 4.

Graphic 4: APA’s Dr. Yeh confirms the AWC IRC OSB performance assessment – “We know from experience that it works under limitation of conventional construction….. Its hard to quantify the resistance to any exact degree.”

SBCA agrees with Dr. Yeh’s assessment and also his point of view as articulated in an article entitled, “APA’s Dr. Yeh on Published Design Values”, and restated here:

It follows then that all buyers should consider requesting a mill specific engineer’s seal for the design values sold by that mill for the grade of OSB or lumber being purchased.

For additional information on the performance of wood structural panel, please visit the following webpage on OSB as a Raw Material.