Originally published by the following source: SBC Magazine — May 14, 2018
by TJ Jerke and Sean Shields

Now into the second quarter of 2018 and raw material costs continue to hold steady at their increases or are trending upward again. Add transportation to the mix and the ability to manufacturer and sell products is more than challenging.

According to recent reports, harsh winter conditions and swelling demand from multiple Canadian industries, including grain and crude, has created a drastic shortage in rail car availability. Because of this, lumber futures have gained about 25 percent this year, among the best-performing commodities.

Don Kayne, CEO of Vancouver-based Canfor Corp., said the company has lost $15.6 million in the first quarter due to the pile-up of inventory because of the rail car shortage. For example, a Nevada component manufacturer was recently informed there is a glut of cars stuck around Las Vegas, and until it was cleared up (no timeline was given), Union Pacific would not send any more railcars to their area.  West Fraser Timber Co. said late April the transportation disruptions resulted in a substantial increase in inventories and the company is uncertain when the backlog of shipments will be cleared.

The roadways aren’t giving the railroad any reprieve, either. Montreal-based Resolute Forest Products said in a recent statement that higher freight costs due to an increase in rates, along with shipping distances and issues related to the truck-driver shortage are contributing to current trucking demand industry wide. According to a 2016 report from the Canadian Trucking Alliance, Canada will have a shortfall of 34,000 drivers by 2024 and that could rise to as many as 48,000 as aging drivers retire and the industry struggles to attract younger workers.

In February, we highlighted the difficulties that were brought into the market beginning in 2015, and consistent cost increases since the end of the free trade era between the U.S. and Canada. Now, as timber owners make record profits, and with the market volatility and record-high prices, it doesn’t appear like it’s going to let up. (Click each graph for a larger image.) 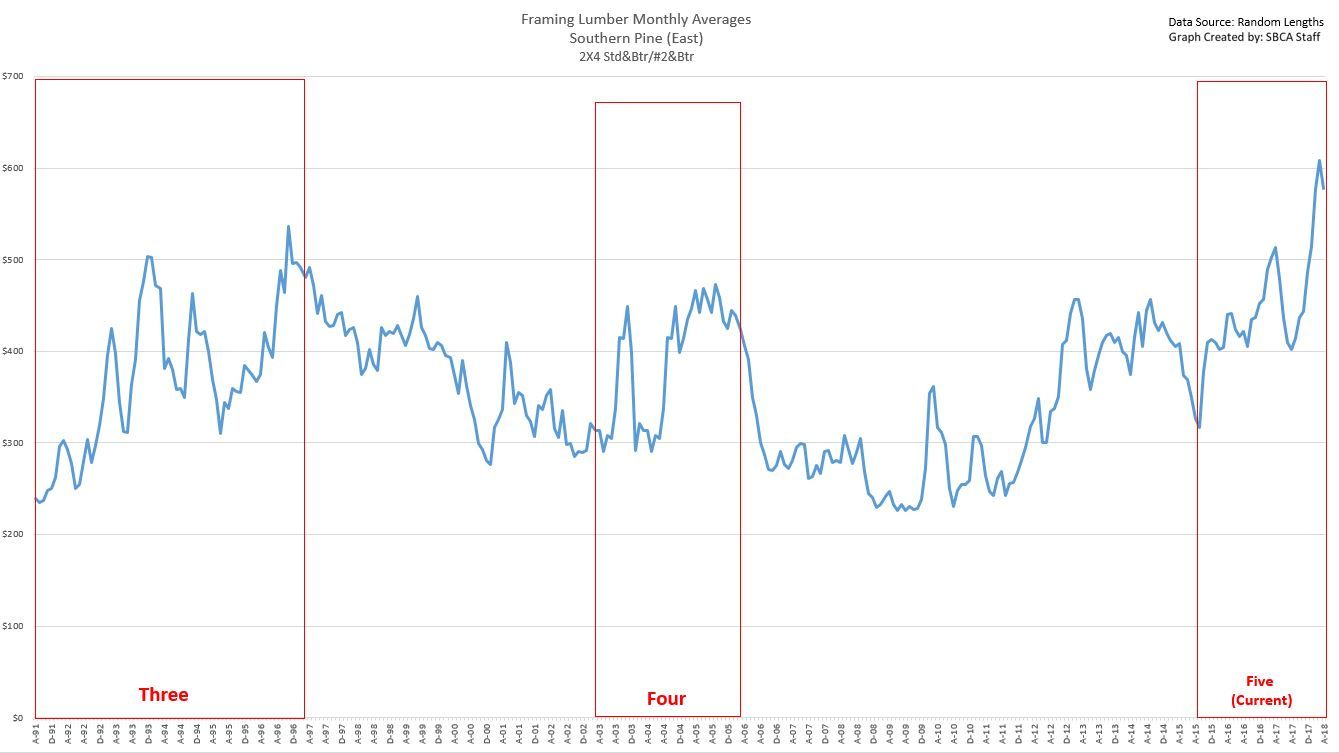 The above graph shows SYP (East) beginning August 1991 and ending April 2018. These are the monthly averages reported in Random Lengths.

The above graph shows SYP (West) beginning May 1995 and ending April 2018. These are the monthly averages reported in Random Lengths.

The above graph shows SPF (West) beginning April 1999 and ending April 2018 These are the monthly averages reported in Random Lengths. 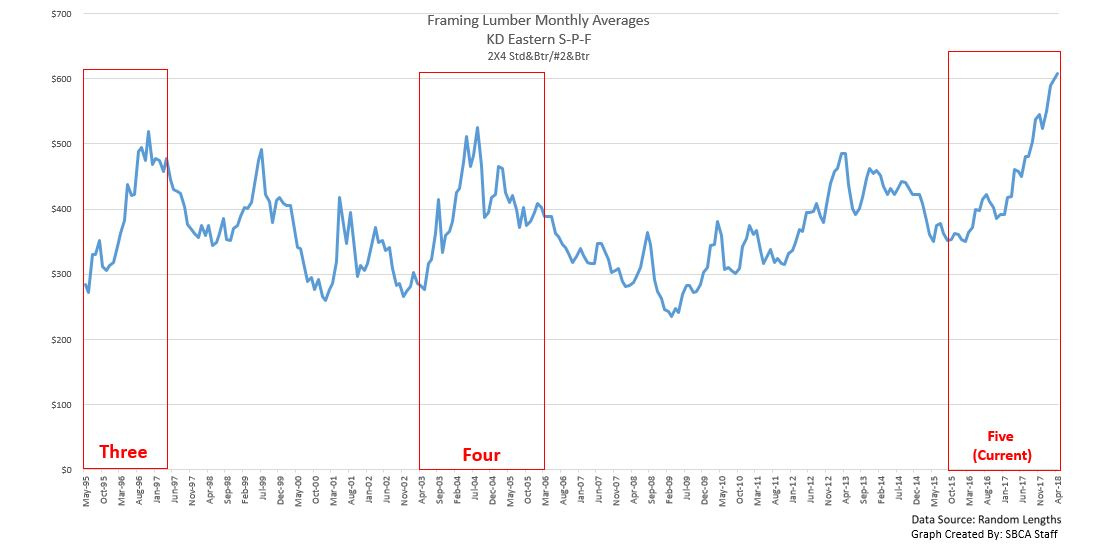 The above graph shows SPF (East) beginning May 1995 and ending January 2018. These are the monthly averages reported in Random Lengths.

CMs have been digging into their books to better understand their costs and how the high lumber costs are affecting margins. As you can see below by the SYP 2x4 #2C 14 ft. chart, weekly prices remain high and are trending back to the early year highs. 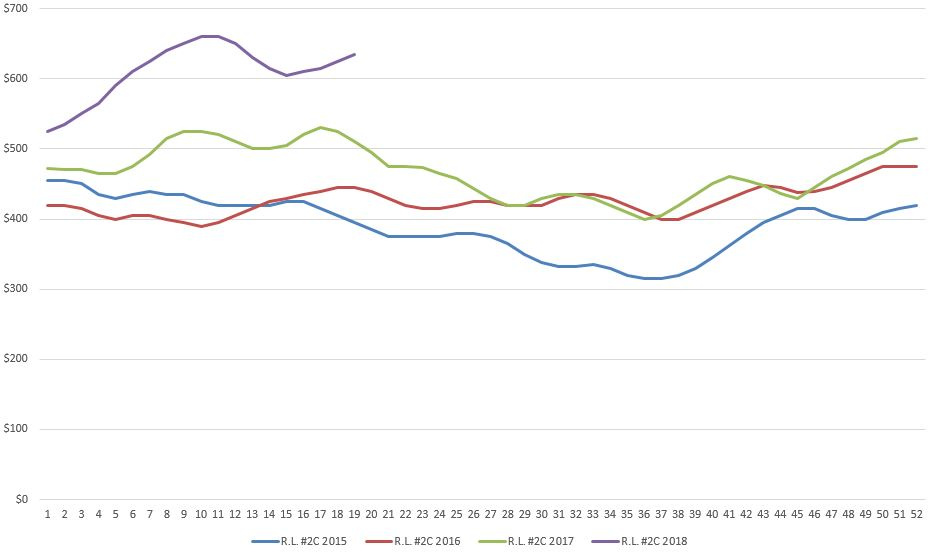 The Trump Administration's steel tariffs are definitely having an impact on the steel market. While domestic producers have responded by stating they are considering bringing additional capacity online, it won't affect the short term market. 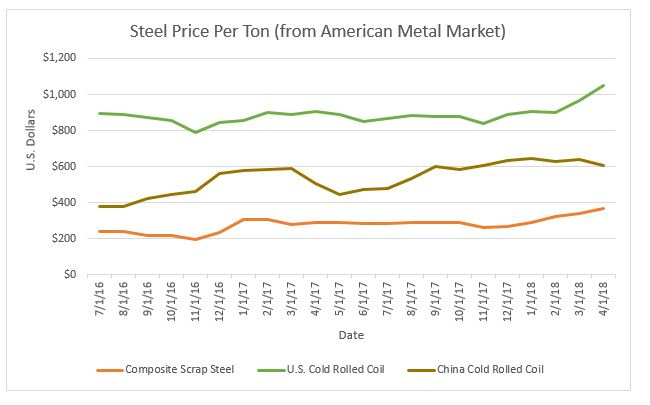 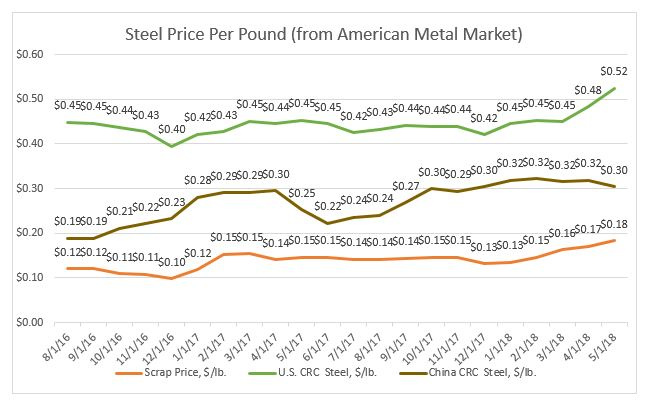 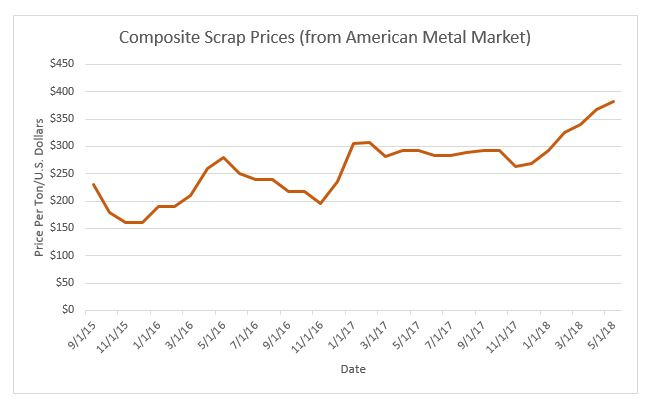 OSB Prices have climbed sharply since January, this is mostly due to unexpected delays in new OSB capacity coming on line. 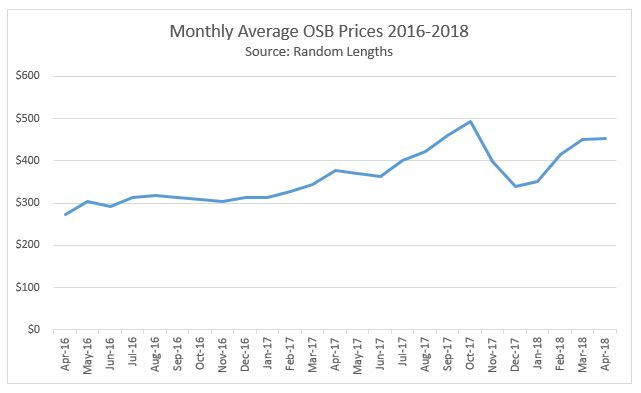