An APA report entitled, A Review Of Large Scale Wood Structural Panel Bracing Tests, states there is a wide range of OSB shear wall resistance performance values given the wide variety of boundary conditions that exist in real buildings. An illustration from that report supports this concept (click on the image to view a larger version):

In Figure 1 (above), the numbers in parentheses refer to the test data row number of Table 2. Also, in Figure 1, the values making up the ranges are based on tests with ho hold down devices. Considering only the range of isolated bracing with no gypsum, Figure 1 data shows that “whole house effects” (long walls, and stiff sections (such as a 2x10) above walls), can lead to peak strength test results close to that of a single 4-ft wall isolated bracing segment with a hold down.

In this graphic, the range of OSB ultimate strength values goes all the way from 200 plf to 1100 plf. As a consequence, APA developed the concept they called "bracing spectrum," and created a series of suggestions based on this concept: 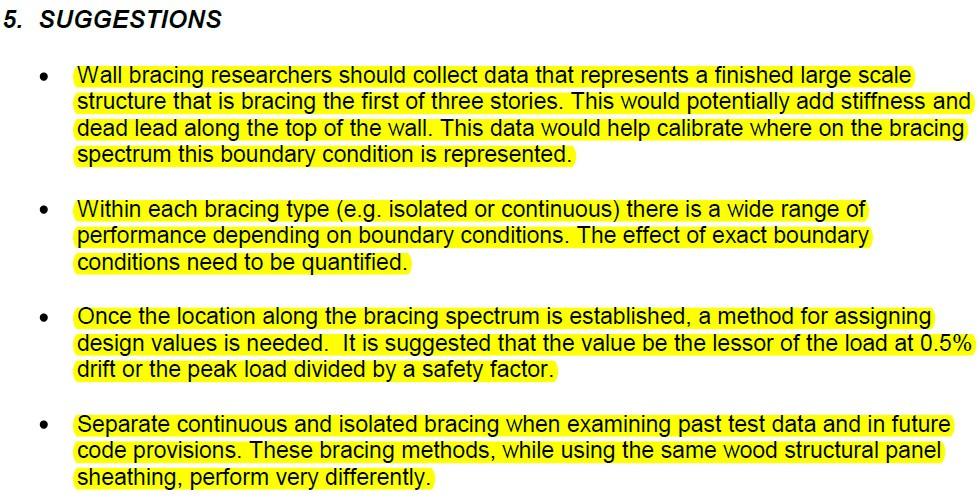 This concept was confirmed in a PHD thesis by John Gruber, P.E., S.E.. Testing by Dr. Gruber showed that OSB shear wall resistance and design values change based on boundary conditions as follows (click on the image to view a larger version): 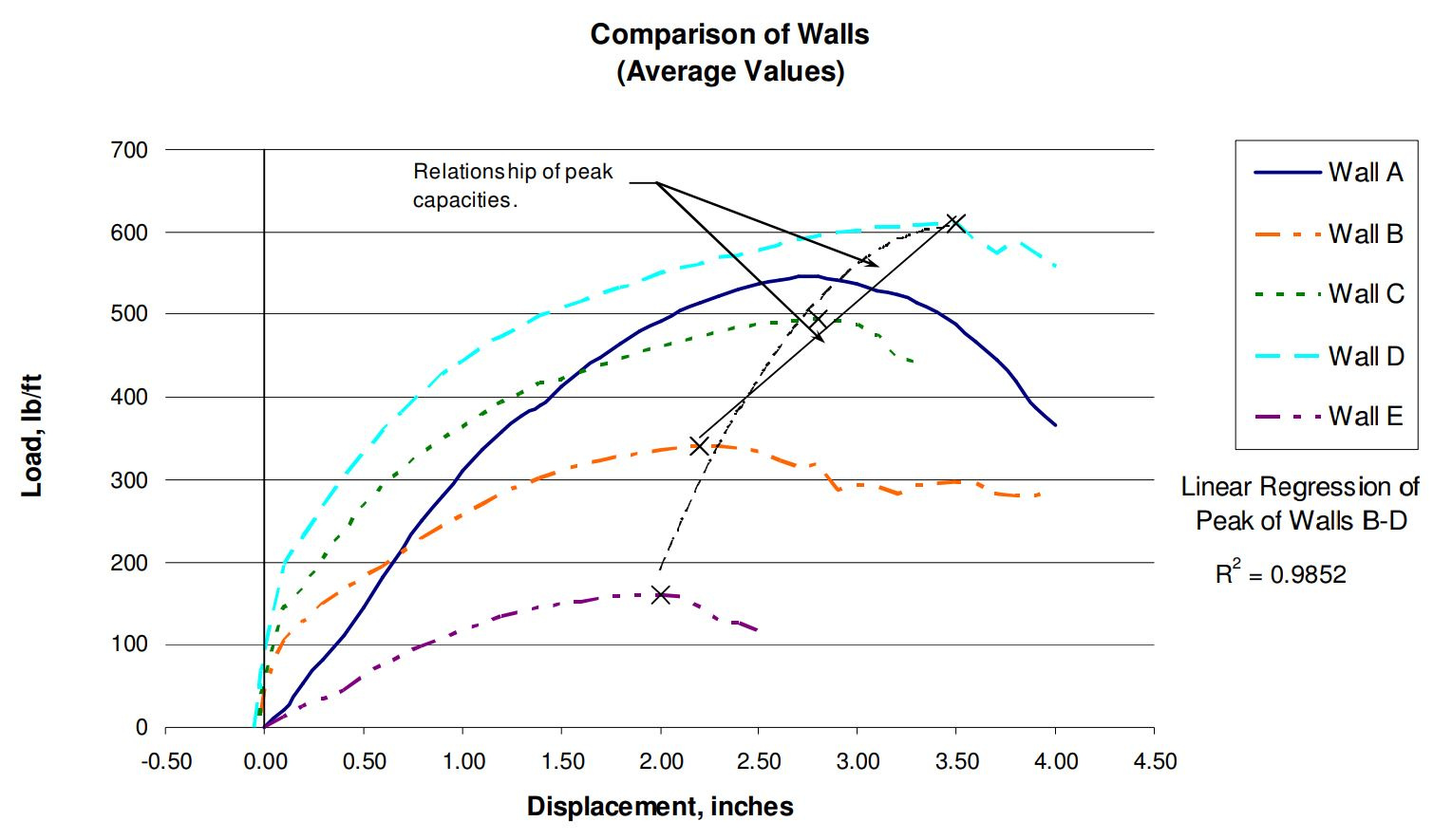 Both APA and Dr. Gruber recognize that there is a wide range of OSB design value performance depending on boundary conditions.

However, the effect of exact boundary conditions need to be quantified. To that end, APA suggests the following approach be used: 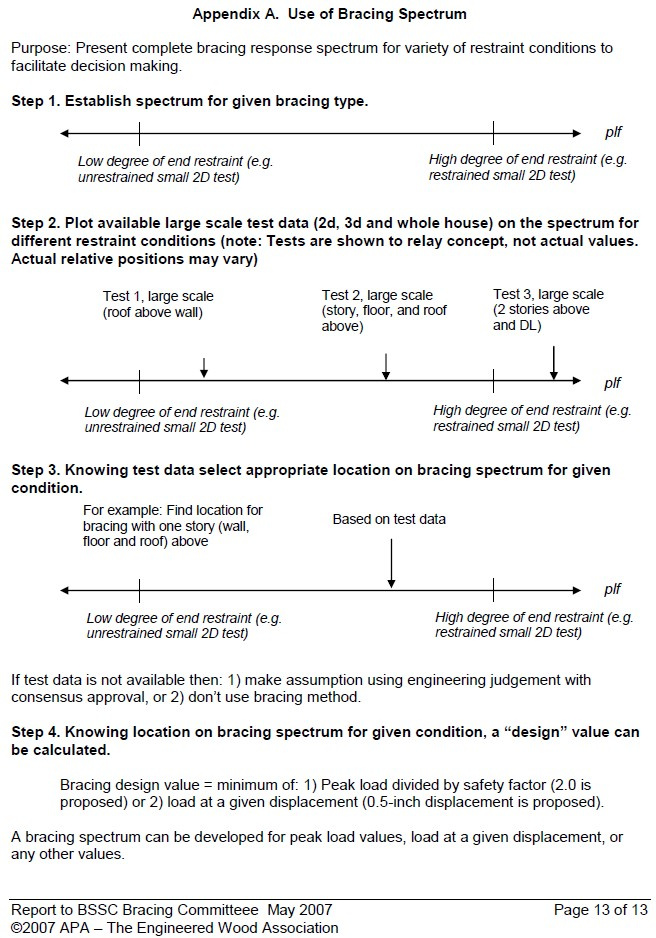 APA points out that boundary conditions can provide a wide range of ultimate strengths. This is especially true when deploying steel beam applied load devices, which are used in many test facilities. This was confirmed in a PHD thesis written by Dr. John Gruber as follows: 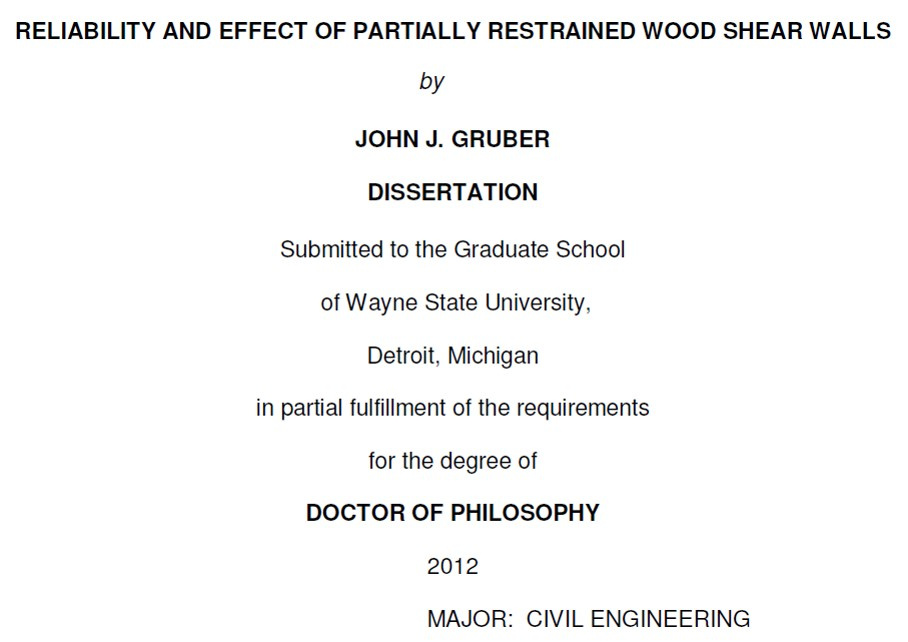 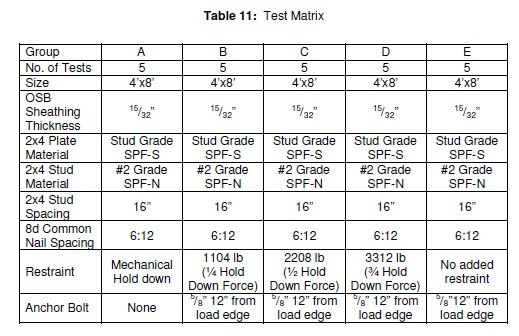 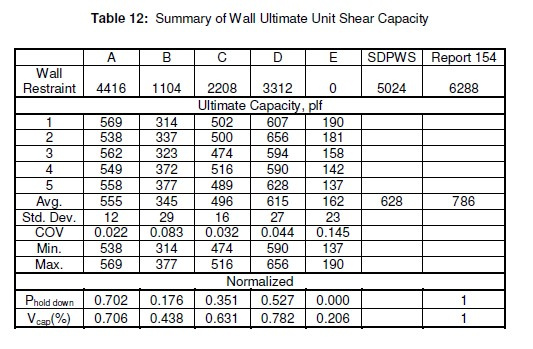 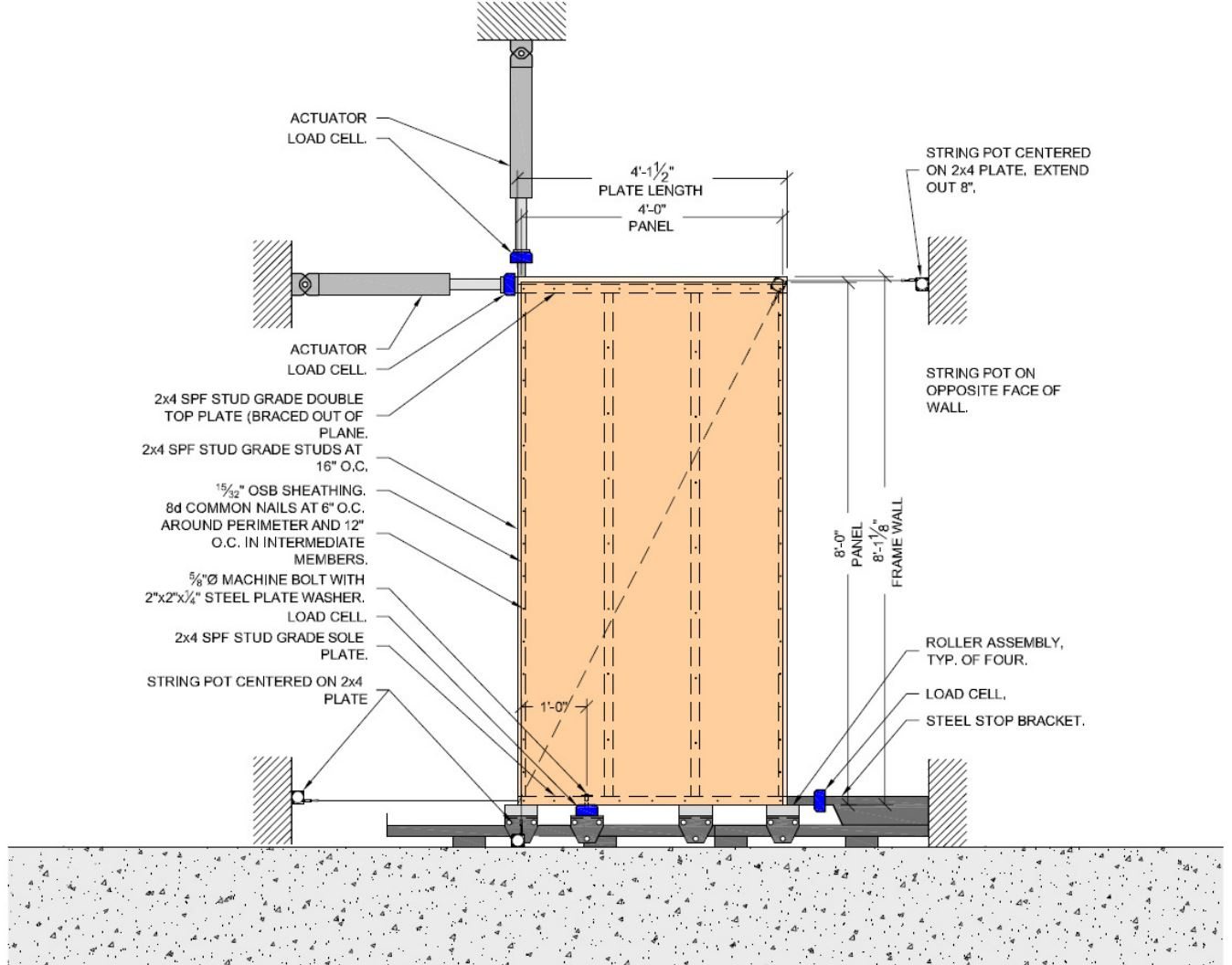 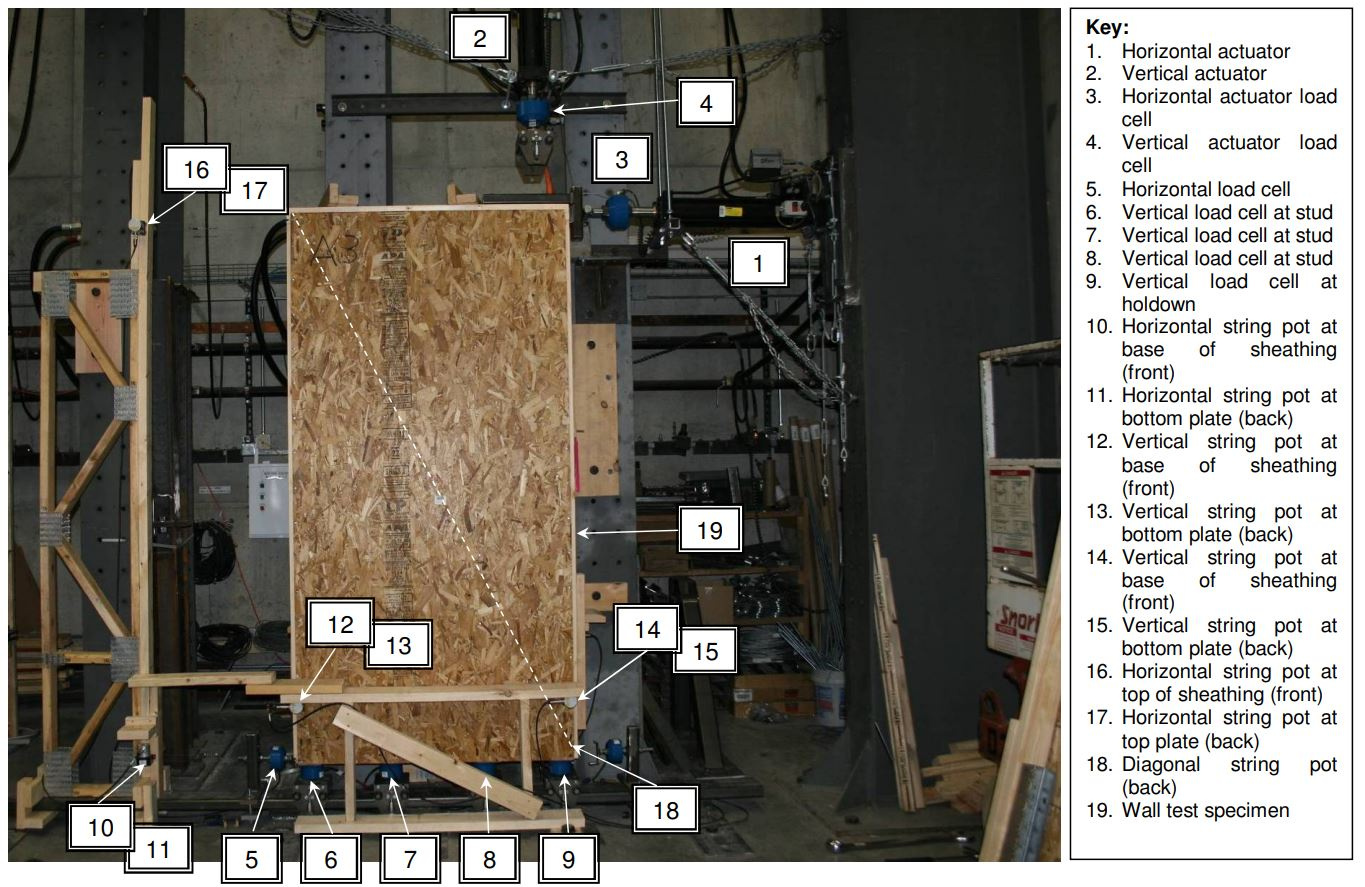 Both the APA and Gruber research show that 15/32” OSB ultimate strength properties, as determined through testing, can range from 137 plf to 656 plf depending on the boundary conditions applied.

This knowledge confirms the need for benchmark comparison testing and the creation of standard factors for OSB equivalency.

To fully understand what the test results mean, there must be a clear understanding of how the facility performed the testing. Using steel beams and threaded rods to apply load, as likely was done in the testing pictured below, the test facility will need to state specifically in their test report the amount of restraint provided by the steel beam and threaded rod boundary conditions. Unless this information is known there is no way to fully understand what the test results mean and how they compare to real world performance. With this information comparison can be made to the Gruber PHD thesis testing to gage the boundary condition effect. 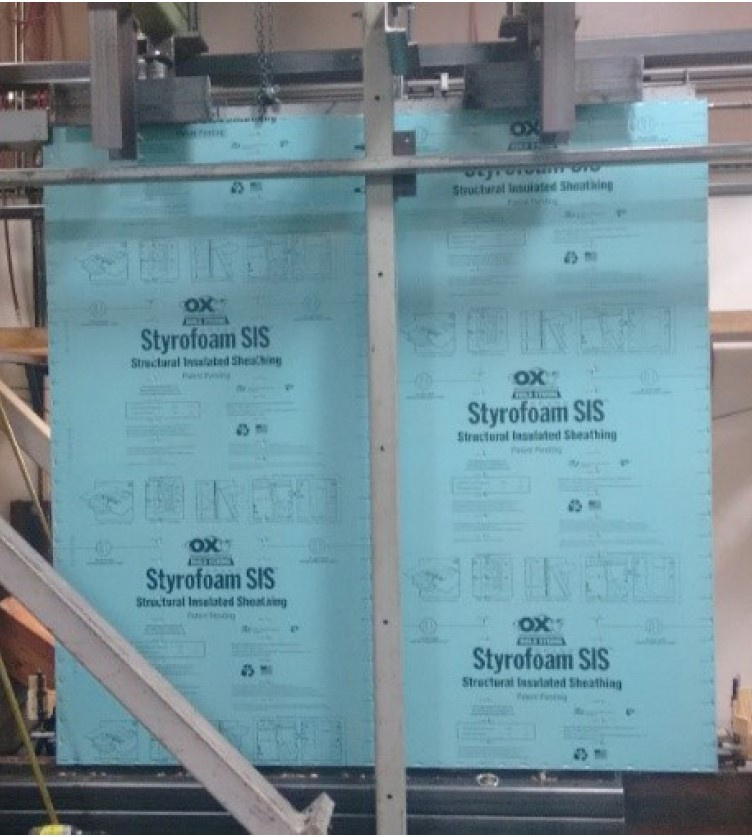 Please compare the foregoing test apparatus with the following two test apparatus photos. View these in the context of simulating actual performance of a shear wall in a building. Which test apparatus do you believe will produce more accurate in building results? 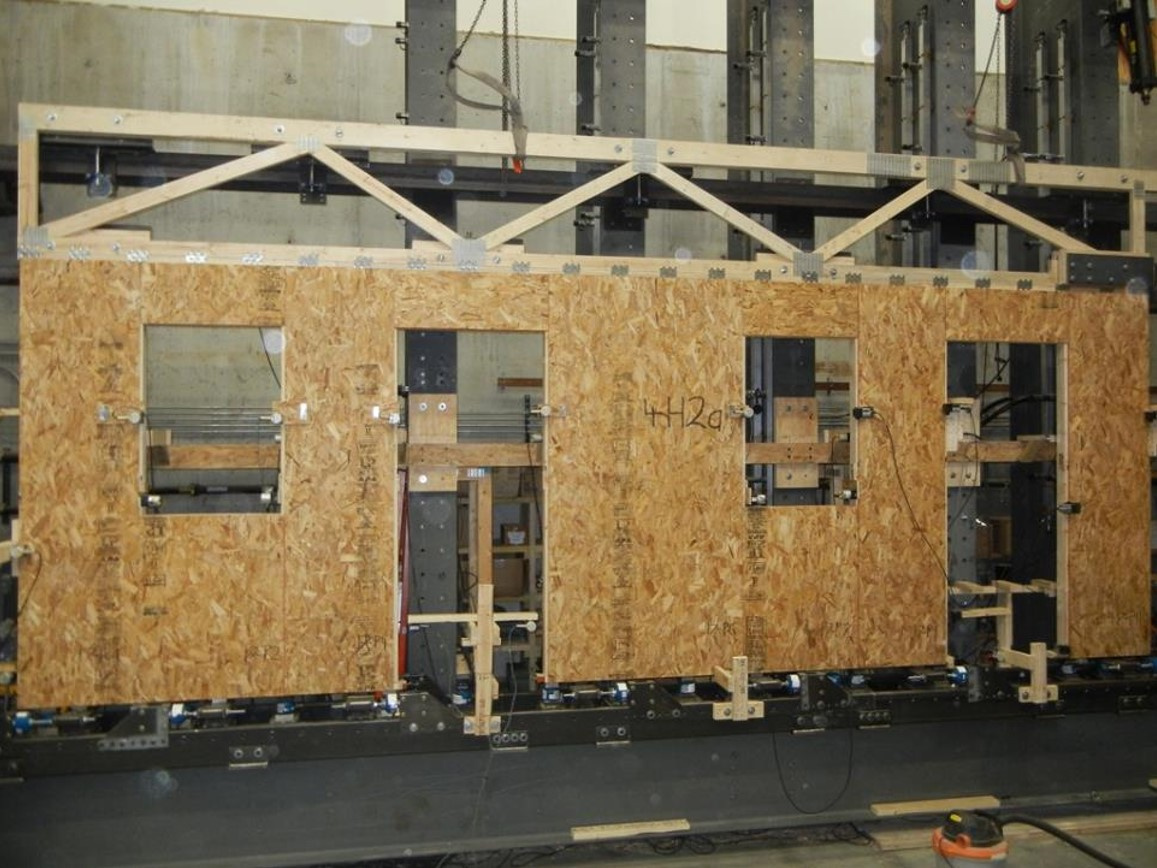 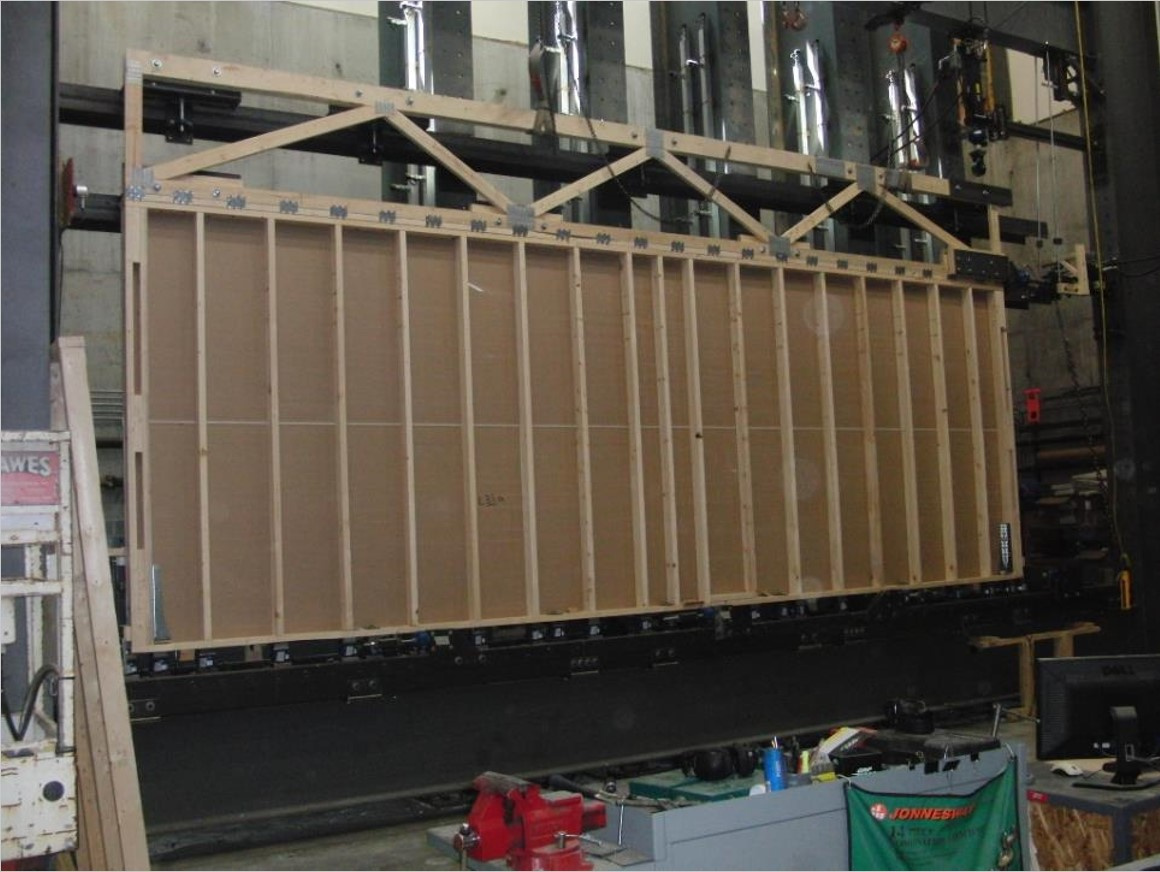 When undertaking any type of testing and engineering evaluation, much more is always taking place in the background than meets the eye. Often the answers revolve around the goals and objectives of the testing. When the engineer undertaking the testing and analysis is willing to apply his or her seal to their work, the engineer likely has a complete understanding of the problem at hand. For acceptance of any test data, engineering evaluation or product evaluation sealed engineering is a great place to start.