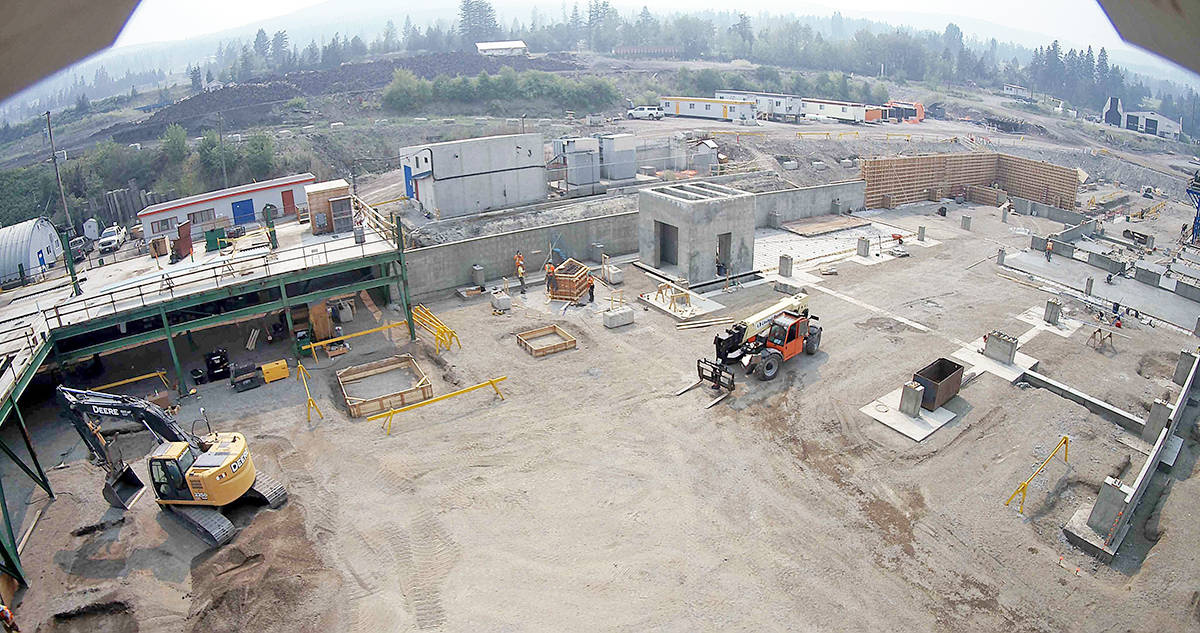 Randy Chadney, Tolko Industries general manager BC Lumber, told the Tribune the demolition was completed in April and the rebuild is underway, noting the source of the fire could not be determined by the fire inspector, but it was confirmed it was not caused by combustible dust.

“We are reconstructing the sawmill and expect to start testing some of the equipment in November,” Chadney said.

Compared to the previous three-line sawmill at Lakeview, the new one will be a two-line sawmill with a canter line and a head rig.

“We curtailed one of those other lines in 2015, so it wasn’t operating anyways,” Chadney said. “The footprint is similar, it’s just going to be a little more streamlined. That mill was built back in the 50s and it had a lot of additions to it which didn’t make it very efficient.”

Chadney said the rebuild has faced some delays.

“Our initial assessment didn’t seem like it was going to be long to get it back up and running, but with the cold weather this winter and water damage from fighting the fire, when we got into the mill and looked at the equipment, the damage was more severe than we thought it was.”

The sawmill building itself was an old stick-frame building that did not meet code and it was also severely damaged in the fire.

As a result, Tolko went the route securing a firm to design and build a pre-engineered building.

“We are fortunate that we moved very quickly when we had approval from Tolko to rebuild the mill and were able to get in the queue to purchase equipment. The forest industry is very busy right now and there can be a two-year lead time to order equipment.”

Sometime in August, residents may notice 47 truckloads of materials arriving for the new building, he added.

In the meantime, trades employees are rebuilding equipment salvaged from the fire as well as some equipment that was repurposed from the sawmill in Merritt that shut down in 2016.

The electrical group is doing some prep work for the new mill and other employees are doing site security and spark watches.

“We are still taking logs into our log yards, and all the mechanics are still here,” Chadney said.

Engineered soil sampling was also required for the rebuild to ensure the foundations were going to be up to code.

“That was done by our engineer for the mill and the people constructing the building. They did methane gas testing, which came back negative, so that was good. There was a lot of permitting stuff that had to be done around landfill issues, but we did really well.”

With so much water at the site each spring, a new water drainage plan with better drainage is being developed, specifically around the perimeter of the building.

Town hall meetings are held every few months at the Cariboo Memorial Complex with employees to update them on the progress of the rebuild. The last one was in mid-July.

Presently 117 hourly employees who were at the Lakeview sawmill before the fire are still working for Tolko — 65 at Lakeview, 37 at Soda Creek Division and 15 in Quesnel.

“Our company and the union have worked together really well to accommodate everybody in this pretty poor time,” Chadney said.