Editor’s Note: As the first sentence in this article states, “windows are complicated.” While this article addresses one approach to effective air sealing, a number of effective approaches to air- and water-sealing windows installed over exterior foam sheathing (very complicated by today’s standards) are outlined in step-by-step guides on continuousinsulation.org/best-practices/window-installation.

Windows are complicated, big openings in a house that can leak both water and air. This article focuses only on air leaks around windows. Preventing water leaks gets even more complicated. (As an example, this article shows one method that works with ZipSystem sheathing. The methods vary when you use a housewrap and vary further depending on whether the window has a nailing flange or not. For a wide selection, see the articles by Gene Summy, Harrison Campbell, Carl Hagstrom, and Greg Burnet).

The goal in air-sealing windows is to seal the gap between the window rough opening and the window unit. Most JLC veterans know they can’t do this by stuffing window gaps with fiberglass insulation. That was a seriously flawed, old-school method. These days, you’re more likely to be handed a can of closed-cell foam, or a roll of backer rod and a caulk gun. 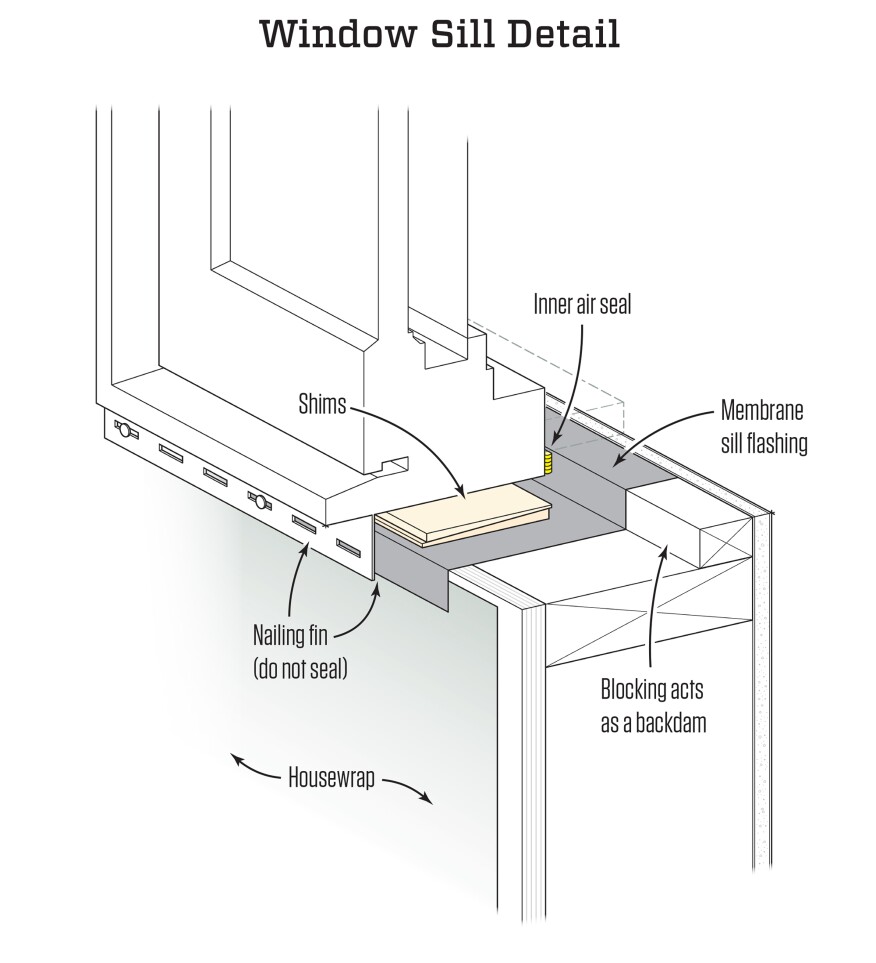 Air-sealing a window is distinctly different from flashing a window. Flashing is done to keep water out. It can’t completely stop air because the bottom needs to be left open to allow water to drain out of the assembly. A window’s air seal, on the other hand, is typically applied from the interior. The bottom of the window is sealed along the backdam, as shown in the illustration above. This bead of caulk should be applied when the window is installed. As a backup to the inner seal shown above, a fillet of caulk can also be applied in the corner between the blocking used as a backdam and the window unit, as shown in the photos above.

While window flashing is often performed by an advanced installer, air sealing is often a task that builders assign to novice carpenters. That should not be construed as this being a less important task. Both the air barrier and the water barrier are vital to building performance.

Like any task, air-sealing is best done when we understand why it’s important. Here are some principles to keep in mind:

Window air-sealing typically takes place after the window is installed, but there is one exception: If a backdam is used, it’s best to apply a bead of caulk along the outer face of the backdam while the window is being installed (see “Window Sill Detail,” above).

Instead of a backdam, some builders may use a piece of beveled siding on the rough sill. The bevel slopes to the outside and helps drain away water that might leak through the window. In either case, there is not enough room to seal the inside with foam; the bottom must be caulked tight instead.

Click here to view the full step-by-step approach to installation the author takes.