Is Lumber Market Emulating Lemon Market, or Just a Lemon?

With a shift in U.S. trade policy, global economics is an issue that is front-and-center.

It’s clear that U.S. trade relationships are critical to component manufacturers (CMs) as the CM industry relies almost exclusively on two commodities, lumber and steel. Unfortunately, domestic markets for both of these raw materials are heavily influenced by a relatively small number of foreign countries.

On the lumber side, we are in the middle of what appears to be growing ownership, with far-reaching implications, of U.S. softwood lumber production capacity by Canadian companies. This shift to foreign ownership is not unique, so we thought it would be insightful to look at how this has played out for another commodity. In this case, we chose lemons.

When we look at the lumber industry and the cost of lumber, we have pointed to Canadian ownership of U.S. lumber mills in the south and its potential impact on the market. Canadian lumber companies continue to purchase mills, garnering a larger market share of softwood lumber in the U.S. Four of the largest North American softwood lumber producers have operations in both the U.S. and Canada. These publicly traded companies were positioned in both the top six in Canada and U.S. going into 2017. According to Forest Economic Advisors-Canada, formerly known as WOOD MARKETS, Canadian companies now control 30 percent of domestic Southern Yellow Pine (SYP) production. 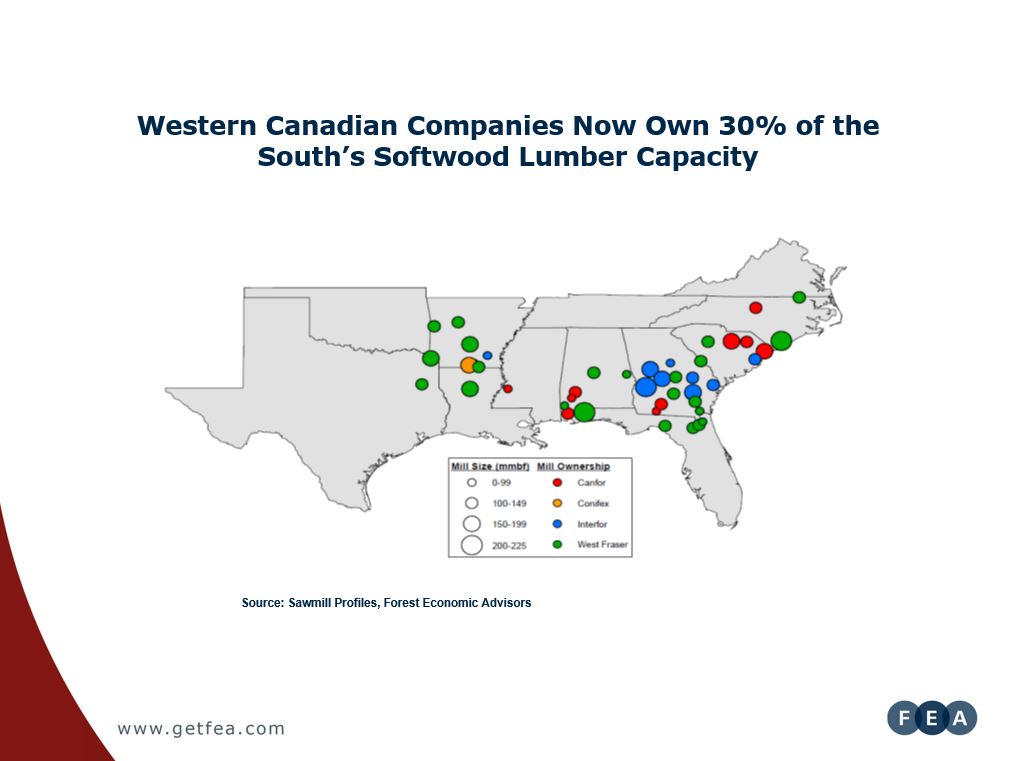 On the lumber side, it is often stated that lumber costs are controlled by simple supply and demand, yet reports show there is not a high demand for lumber right now. What is behind this?

Well, one possibility is that supply and demand are not the only factors in play. Back to the lemons. With control of the majority lemon production, the multinational corporation holds a different set of financial values than a local farmer or a regional or national market. Commodity exchanges for lemons are essentially dead. Taken together, the mercantile exchange for lemons is no longer a free or supply-based market; it is now a controlled market exploited by a handful of large multinational corporations.

Instead of the traditional ‘supply/demand’ equations determining prices, the corporations look at each country and determine what prices they can afford. The supply of lemons is then distributed to the country according to their ability to afford the price.

What does this mean? If one corporation holds the rights to the majority of the lemon production in Brazil, Argentina and the U.S., the price the U.S. consumer pays for the lemons is directed by the amount of inventory that company decides to distribute in the U.S.

This is bad when, for example, the U.S. lemon harvest is abundant. The company that controls the lemons can choose to export the product to keep the U.S. consumer spending at peak or optimal price. A U.S. customer might pay $2.00 for a lemon, while a Mexican customer might pay $0.50 and a Canadian $1.25.

Could we be witnessing a replicate of the lemon industry with the purchases taking place in softwood lumber?

Rather than sitting tight and waiting to see what comes next out of U.S. trade policy, Canadian lumber producers are diversifying their holdings.  Further, the British Columbia government announced it will be investing $7.8 million to promote the use of their wood products, with a focus on Asian markets.

Investing in Asian markets to further diversify their customer base is another step toward Canadian lumber producers shifting their exports to non-U.S. markets.

If Canadian lumber producers can raise the costs of lumber, is that their ticket to solving subsequent softwood lumber disputes? How can one argue that there is dumping when the cost of lumber is much higher than the cost of producing it?

While this is conjecture, it raises a few key questions for CMs to ponder:

Who knows what is taking place specifically, but it is odd that the demand for lumber has been low, given the very poor spring weather, yet lumber costs have been high.

It defies common sense. What do our readers think is taking place?