Would Smoke Alarms and Sprinklers Have Saved Grenfell's Installed Cladding?

Editor's Note:  Energy Efficiency & Building Science News is publishing this story to raise awareness of information publicly available online and does not, nor cannot, vouch for the validity of any claims made in the following article. This article is a follow up to London's Grenfell Fire: Will Plastics Be Inappropriately Blamed?

Early Wednesday morning, a catastrophic fire engulfed Grenfell Tower, a 24-story block of public housing in the Kensington area of London. The flames spread rapidly through the 120 apartments and the entire building was destroyed in the blaze. Firefighters rescued many of the occupants, who had been advised to stay in their homes, but at the time of this writing 30 people are confirmed dead. That number is likely to rise as many of the people living on the upper fl 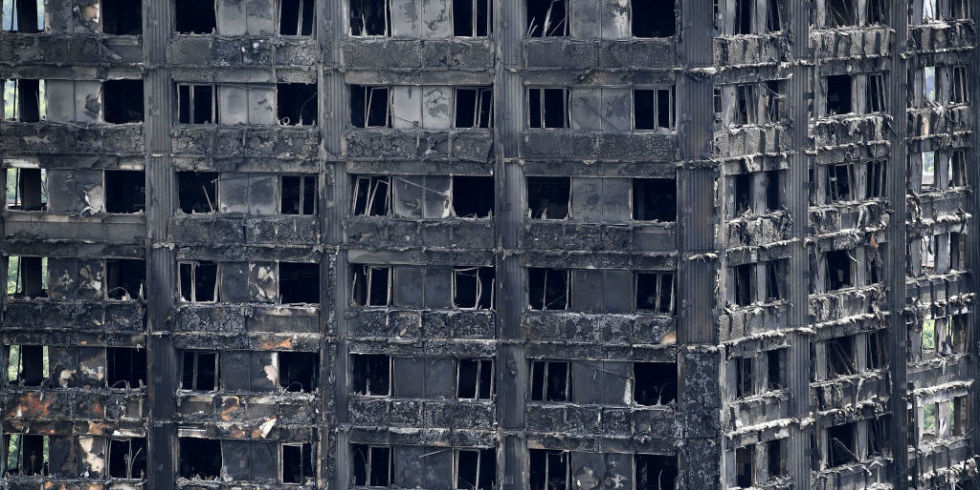 oors have not yet been accounted for.

Today, one major question remains, how did the fire spread so rapidly?

According to news reports since the fire, the answer, in part, seems to lie in cladding that was applied to the building as part of a refurbishment completed last year. Described as "rain screen cladding," it was added partly to improve the appearance of the building. A London newspaper has suggested that the cladding was to make the raw concrete tower less ugly when seen from new luxury housing nearby. (Public housing aside, Kensington is a prestige neighborhood where the average apartment price exceeds $1.7 million.)

However, similar cladding has been implicated in having worsened several previous fires. The type used in Grenfell Tower has been identified by the BBC as Reynobond, which consists of two thin sheets of aluminum sandwiching an insulating filling. The filling may be mineral wool or plastic. In this case it was an extruded thermoplastic called polyethylene – the same material used to make plastic bags. Polyethylene has a very low melting point and drips as it burns. This means the fire can spread upwards with the rising flames and downwards with melted, burning plastic at the same time.

The UK's Building Research Establishment (BRE) carried out tests with this type of panel, and noted that "the panel, when exposed to the high temperatures of a developed fire, will tend to delaminate between the facing and core material, due to a combination of expansion of the membrane and softening of the bond line." In other words, the aluminum facings fall off, leaving the flammable plastic core exposed. Another troubling element about this already terrible story: The Times of London reports that a fireproof version of the cladding used on Grenfell tower would have added just $6,000 more to what was already a $12 million refurbishment.

There have been similar incidents around the world. A huge fire claimed The Address, a tower block in Dubai, on December 31 2015. This was an external cladding fire, with hot metal and melted core material showering down in the area and causing fires on adjacent roofs. The next day the area was found to be covered in the delaminated aluminum casings. Aluminum cladding with a plastic core was held responsible for the Lacrosse Building fire in Melbourne, Australia, in 2014. Fire raced through the building in minutes, due to the supposedly resistant cladding called Alucobest.

Although the cladding is the source of the problem, the way it's installed can also make matters even worse. Usually there is a gap between the cladding and the building, and if flames get caught in the gap, they will stretch out seeking fuel and oxygen. The visible flames in the fire are several feet high, but according to the BRE, inside a cavity they can be stretched out five to ten times as long. The gap between building and cladding effectively acts as a pipe carrying flame: "This may enable fire to spread rapidly, unseen, through the external cladding system, if appropriate fire barriers have not been provided," it says.

In fact, there are supposed to be "fire stops" built into the construction specifically to prevent fire spreading between the different sections. If these are in place according to regulation, the fire should not be able to spread rapidly. Whether the fire stops at Grenfell Tower were installed correctly will be one of the issues examined by the public enquiry which was ordered yesterday by Prime Minister Teresa May.

In the U.K., the standard advice for residents in high-rise blocks is that they should stay put. Unless their own home is on fire, it ought to be safer for people to remain behind fireproof doors than to venture out into corridors and stairwells filled with smoke. Firefighters should deal with the blaze and rescue anyone in danger. This advice was last reviewed after a fire in 2009 in London which killed six people, and after events this week, it is likely to be reviewed again.

The Grenfell Tower tragedy was the worst fire in London in years. In Australia, building owners were forced to remove combustible cladding after the Lacrosse building fire, and similar measures may be imposed in London. There have also been many complaints that concerns about fire safety at Grenfell Tower had been ignored, including lack of a working fire alarm system or sprinklers. Similar complaints in other building should be addressed as a matter of urgency before another fire strikes.

With so many deaths and accusations of neglect, it's no wonder that the accident has turned into a full-blown criminal investigation.

SBC Magazine appreciates your input, and continually seeks to improve the value it provides to the market. If you have any comments or corrections on this article, please email us(link sends e-mail) and we can publish your comments.