Why Quick Ties are So Effective and Easy to Install

It’s a simple galvanized wire rope with threaded studs (bolts) swaged to each end, furnished with a square washer(s), nut(s) and installed into an epoxy filled, field drilled hole into the bottom plate and the concrete footer (or floor).  The upper end is snaked upward to the top plate through field-drilled holes in the wall framing, terminating with the large washer, nut and specialized field tightening. 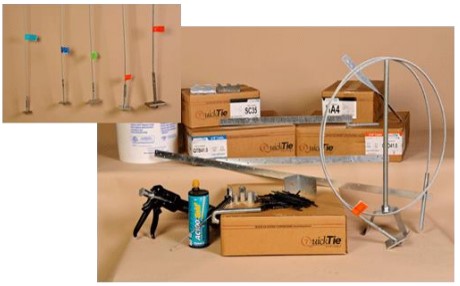 When properly installed, the Quick-Tie anchor will resist uplift forces on the structure and will aid in resisting the sliding and overturning forces acting on the shear walls.

The stretch makes it work as nicely as it does.  Consider this.  When installed as a “tie-down”, the wire rope actually pre-stresses (pre-compresses) the structure. Any uplift force exerted on the structure will result in ZERO movement of the structure until the built in stress of the wire rope is exceeded.  For example, if a “Quick-Tie” is installed every six feet in an external, load bearing wall and is stressed to 2200 pounds, there is NO movement, deformation or increased gaps in the wall components until the uplift forces exceed 2200 pounds over 6 feet.  If trusses are attached to the top plate every 24 inches, the uplift force per truss would have to exceed 733 pounds before any of the intervening components would start to pull apart.

Another interesting feature is that Quick Ties actually compensates for shrinkage that occurs in wood framed structures.  Remember, the Quick tie is a wire rope that stretches as it is tightened.  Actually, all materials would stretch if they were tightened in a manner similar to Quick-Tie’s. Most of them, especially steel rods and bars, stretch considerably less due to their larger cross sectional area and larger “modulus of elasticity”.

The amount of elongation due to stressing is usually much less than the amount of shortening (shrinkage), usually resulting in the rod and nut sticking up from the top plate.  At this point, there is no positive anchorage of the building.  The rod or bar can offer no uplift resistance until the resulting shrinkage gap has been eliminated by the components being pulled apart.

This shrinkage phenomenon is no less common in structures anchored the “old fashioned way”, with stud plate anchors and/or straps.  After the hardware has been installed and the structure shrinks, the hardware is actually “loaded backwards”.  Before the hardware can effectively resist the uplift loads, the wall components must be pulled apart by an amount equal to the shrinkage.  Now as the load is increased, each piece of construction hardware is subjected to loads that cause them to deflect or elongate, increasing the amount that the wall is “pulled apart.

But consider Quick Tie.  During installation, the wire rope can be temporarily overstressed to compensate for the expected shrinkage.  As the shrinkage occurs, the wire rope shortens; removing the temporary overstress and now is capable of resisting the total expected uplift WITHOUT the damaging effects of “pull apart”. 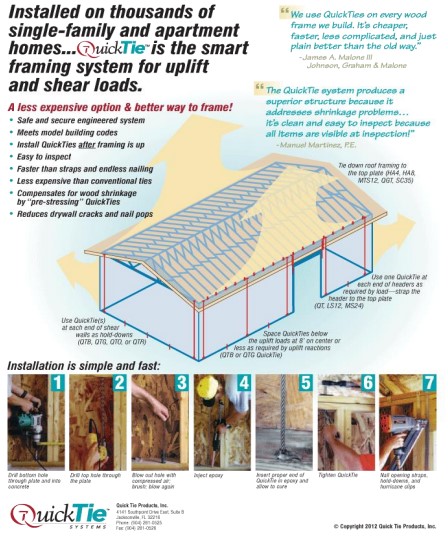 Even when special devices such as “spring loaded nuts” or “take-up washers” are installed, they are limited by the spring constant or take-up length.  The device may partially compensate for the shrinkage, but it does nothing to reduce or eliminate the deformations caused by uplift loading.  So you see, it’s the stretch that makes the quick tie work so well.

It must be pointed out that when using Quick-Ties, the walls into which the ties are installed have been pre-stressed (loaded in compression). In rare instances, a stud or two may become overstressed if it is located immediately adjacent to the Quick-Tie.  When installed to a working load of 2500 pounds, the compressive stress in a single 2 x 4 stud is 476 psi.  However, two or more studs usually share this load.  In single-family homes, of two stories or less in height, the compressive load in studs is relatively small.  The largest stresses in exterior load bearing walls, is usually exerted by the wind in high wind zones. Where these infrequent conditions occur, it is cost effective to add an additional stud or two, and reduce the compressive stress.

Pre-stressing a wall isn’t always a negative factor.  Consider that when an exterior wall is pre-stressed with Quick Tie anchors at regular intervals, the resistance to “overturning” of the wall is greatly increased.  Regularly spaced Quick-Ties may reduce or eliminate the need for specialized “hold down” anchors at the ends of each shear wall segment.  The ½ inch diameter studs, plus the epoxy also offer substantial resistance to the shear wall sliding. Remember that the Quick Tie keeps the wall in compression, in tight contact with the floor to increase the sliding resistance by friction.  Anchor bolts and other systems contribute little to resisting this force.

The Quick Tie anchors are easy to inspect; when looking at the top plate, a large portion of the stud is visible, a sign that the tie has been tensioned.  Pulling in the wire rope will also provide assurance that the tie has been tightened.  When looking at the bottom plate, the exposed stud should not project above the plate more than ½ inch.  If the stud is exposed more than ½ inch, the embedment in epoxy is deficient.  It signifies that the stud has less than 4 inches (for ¼” Quick Ties), of embedment in the concrete.