Editor’s Note: The following article was written Jon Kamp and Laura Kusisto of the Wall Street Journal.  SBCA has opened a dialogue with Kamp and Kusisto through email correspondence, encouraging them to learn more about our industry’s efforts to share a common sense approach to mitigating fires in buildings while under construction.

Shortly after Independence Day last year, developer Rick Holliday got a call informing him his 105-unit apartment building, under construction in Oakland, Calf., had gone up in flames.

Mr. Holliday suspected the fire was sparked by teenagers shooting off fireworks at the crucial point when the structure was fully framed with wood but the sprinkler system wasn’t yet installed. He began a $15 million rebuilding job, again using wood framing to get the project restarted as quickly as possible.

This May, at a similar point in the construction, the building burned a second time. Oakland officials determined it was arson. Mr. Holliday plans to rebuild yet again—but this time he is considering using metal studs.

The fire was one of many recent ones at wood-framed apartment buildings under construction. Developers often prefer wood over steel because it is quicker to erect and can cut framing costs by at least 10% to 20%.

But while fire-safety officials say wood-frame buildings generally are safe once they are completed, they are particularly vulnerable to blazes before they are outfitted with their walls and safety features such as sprinklers.

“You have nothing but a vertical lumber yard with very limited protection,” said Joseph Finn, Boston’s fire commissioner. “I think it’s a significant risk.”

Two other big fires have hit wood-frame apartment buildings under construction in Oakland over the past year. In the Boston area, two large wood-frame buildings being erected burned this summer. Similar blazes have erupted in wooden buildings being built in Maryland, North Carolina and other locales.

The fires have stoked worries about the hazards of wood-based construction, said John McGrath, fire chief in Raleigh, N.C., where a massive fire destroyed a wood-frame project in March.

International Building Code standards, which U.S. cities and states widely adopt, allow for up to five stories of wood-frame construction atop a three-story, fireproof base typically made of concrete. The wood must contain fire-retardant materials. For taller buildings, developers are required to use a different material, typically steel, under the standards.

Wood has been growing in popularity, developers say, because construction costs have risen so sharply over the last several years that it is the only way to erect a building that most renters can afford outside of gilded markets like New York and San Francisco.

The lower material costs of a wood-framed building help balance out rising labor and land costs. As the high end of the apartment market becomes saturated and developers build more midmarket buildings, wood is only likely to become more popular.

“Quite simply, to build buildings where the rent is affordable to a market-rate renter and most certainly an affordable-housing renter you almost need to make it out of wood frame,” said Toby Bozzuto, chief executive of Bozzuto Group of Greenbelt, Md., which includes a construction company that has some $750 million of apartments in its pipeline.

A massive fire last month destroyed a 264-unit, wood-frame apartment complex rising in Waltham, Mass., outside Boston, while damaging nearby buildings and causing an estimated $110 million loss, according to authorities. 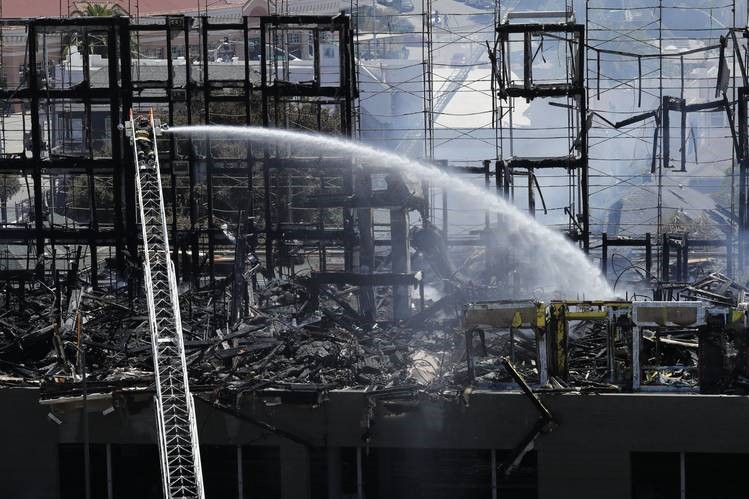 “There’s no guarantee we’ll be that lucky the next time,” Mr. Logan said.

He said he would like to see tighter on-site security, which is something the contractor in Waltham said it is already adding at building sites. Authorities in Boston, meantime, are examining safety protocols for wood-frame construction.

A Maryland state senator has introduced a bill that would require 24-hour on-site wardens at wood-framed buildings above three floors while they are under construction.

Developers and a wood-products trade group said they support beefing up security at construction sites, especially given that some of the recent fires have been set deliberately, as well as improving relationships with fire departments.

“We’re doing a lot of construction in places we haven’t been present—high-density, urban cores....That really changes the fire potential. You’re much closer to other buildings,” said Paula Cino, vice president of construction, development and land-use policy at the National Multifamily Housing Council, which represents 823 of the largest apartment companies nationwide.

Firefighters said they are particularly worried about fire risk before the installation of interior wallboard, sprinklers and alarms that help protect residents. The construction process itself, which can involve sparks and heat from tools, can pose fire risks.

Boston’s fire department blamed a June blaze at an almost-finished wood-frame residential building on a hot generator exhaust pipe that was built too close to combustible material. The building’s sprinkler system wasn’t yet turned on, and didn’t have to be, the department said.

A spokesman for the contractor, Cranshaw Construction, declined to comment on the fire’s cause, saying the matter remains under investigation and the fire department assessment doesn’t tell a complete story. The company is committed to industry best practices and safety for wood-frame buildings, he said.

Matt Zahler, senior project manager at the project’s developer, Trinity Financial, said the building was slated to include many affordable units for low-income tenants, and that the company plans to rebuild. Trinity also wants to explore ways to protect wood-frame building sites.

“We didn’t recognize how vulnerable this building was during the construction period,” Mr. Zahler said.