Framer Marvels at His Time Savings with FrameFAST

It’s an unusually hot day in southern Washington, and we’re on an AHO Construction jobsite.  The sun is not quite directly overhead as the mercury pushes 90 degrees and the occasional breeze kicks up dust clouds from the now dry earth around the 2,200 square foot, two-story home.  25 trusses were swung into place just a few hours earlier, and we’re here for a trial of FrameFAST.

Designed to increase the speed, strength, and safety of making truss to top plate connections, FrameFAST is an innovative fastening system that allows the framer to make this connection while standing on the floor level.  This system eliminates the need for ladders, pneumatic nail guns, hurricane ties, and nails that are typically used to make these structural connections.

We’re meeting with Paul Hill, the owner of Day Star Construction, Inc.  His crew is responsible for framing the home we’re working on.  Today is a big day for Paul.  As he drives onto the job site, he lowers the window of his pickup and proudly tells us he just welcomed a new grandchild to the world.  The excitement and pride would tell you this might be his first.  But in reality Paul now has an incredible 45 grandchildren.

Paul operates two crews, each with 6 framers.  They frame about 100 homes per year, most of which are similar to the two-story home we’re framing today.  As Paul parks his truck next to the site, the excited gleam in his eye becomes more focused as he inspects the newly framed house.  This is a busy man, and he is ready for the task at hand.

We climb the stairs to the second level and get ready to fasten the trusses.  Paul simply plugs in his FrameFAST, drops a few handfuls of screws into his tool belt, and locks FrameFAST in the on position.

It’s smooth sailing from that point, and 13 minutes later Paul has made all 56 truss to top plate connections.  The fastener heads are set perfectly into the very top plate, and the angle of each screw is constant.  The job is complete. 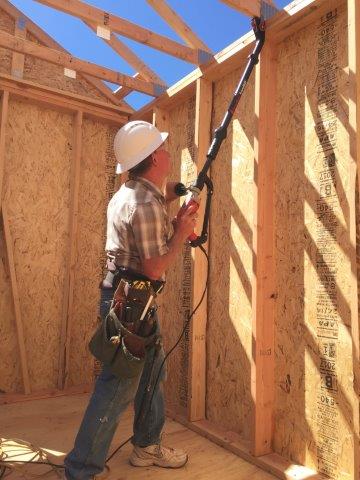 Paul sees significant value in eliminating the use of a ladder while making this connection.  “With the long reach of the tool, we can do it while walking along the floor,” he says.  “Not climbing up and down ladders is a big thing for us.”

The identical house, using hurricane ties, takes Paul 35 minutes.  He quickly notices that one hurricane tie was not installed correctly, and it takes him an additional 4 minutes to replace.

The time savings and ease of installation are easy to recognize.  Paul has been using FrameFAST regularly for the last 6 months.  I ask him how long hurricane ties and nails take on a typical house he frames. “It usually takes us up to an hour and a half,” he says.  “Timewise, saving 30 minutes to an hour on a house (with FrameFAST) makes a big difference.”

For Paul, the improved safety that comes with eliminating the ladder and less use of his teco nail gun are meaningful.  “Using teco nail guns, if you don’t get them in just right the nails can go flying,” Paul says.  “Your face is usually right there pretty close when you’re on a ladder.  That’s a safety issue we’re saving on with FrameFAST.”

We’re done with the job faster than Paul expected, so we find some shade for a lunch break on the first floor of the home.  I ask Paul if he plans to continue using FrameFAST on future jobs.  For an instant, Paul’s expression seems to ask if I’ve seen anything that just happened.  But he’s too polite to call me out on it.

Instead, the expression turns back into the grin we saw earlier in the day.  “Oh yeah, I sure hope to” he says.  “Installing from the floor is what I really like about it. Not climbing up and down ladders: that’s the biggest thing.”