16 fatalities occurred in the collapse of one building—a “soft story” apartment complex, Northridge Meadows. The loss of life was accompanied by the high cost to repair or even replace buildings damaged in the event.

Soft-story multifamily buildings are common in many California metropolitan areas. They are typically constructed with tenant parking on the ground level and two or more floors of apartments above. The parking level is referred to as a soft story because the upper levels are supported on very narrow walls, or oftentimes on posts, to provide wide openings for cars to enter.

To demonstrate the structural shortcomings of a soft-story building in an earthquake, visualize a tabletop with wobbly legs supporting a lot of weight. The table will support the weight, but shaking it side to side will cause the legs to buckle and collapse. The effect on soft-story structures can be the same. The narrow walls were designed for supporting vertical loads, the weight of the upper floors, but will fail when lateral loads are applied.

After years of consideration and study, code officials in the San Francisco Bay Area and in the City of Los Angeles have recently adopted ordinances that require soft-story seismic retrofits. The purpose of the ordinance is to provide the structural integrity to prevent loss of life, to mitigate a possible building collapse, and to prevent inhabitants from being displaced from a condemned building. There are currently well over 18,000 wood-frame buildings identified that will require retrofitting under the local ordinance. The Los Angeles Times has reported that in the City of Los Angeles alone, there are an estimated 13,500 buildings identified, each of which must be retrofit with code-approved seismic structural solutions.

Time requirement. The amount of time the building owner has to complete the retrofit can vary depending on where the ordinance was adopted. In L.A., building owners have seven years to complete their retrofit requirements. In the City of San Francisco, the required completion date depends on the building type. Type I buildings (“any building containing educational, assembly, or residential care facility uses”) must be retrofit by September 2017. Type IV buildings (“any building containing ground floor commercial use”) have until September 2018 to submit permit applications, and until September 2020 for the work to be completed.

Contractor opportunities. The Los Angeles and San Francisco building departments are the first to adopt soft-story retrofit ordinances, and these may lead other jurisdictions to adopt similar policies. Industry observers agree that the soft-story retrofit requirements should, and will eventually, be adopted into many, if not all, of California’s high seismic zones. From there, look for ordinance adoption to occur in other states, such as Oregon and Washington, with high Seismic Design Categories.

While the adoption of retrofit ordinances is good for public safety and a pragmatic way to retain housing in a major earthquake, it also offers a business opportunity for contractors who are willing to train in, prepare for, and market these retrofit services. Estimates of the collective retrofit business range from $150 million to as much as $200 million. (Google “soft story retrofit” to see a burgeoning list of websites with information on codes and solutions.)

Code-evaluated structural solutions and materials for soft-story retrofits are widely available. There is not a single solution for all buildings nor is there a single solution within a particular building. For some conditions, conventional plywood shear walls may be appropriate; in others, pre-fabricated structural-shear-wall systems or manufactured moment frames will be necessary. But for maintaining parking areas beneath multifamily, soft-story buildings, retrofit moment frames are frequently the best solution.

Moment frames consist of columns and a beam joined with a “moment connection.” Loads are resisted by these frames through bending in the beam and columns. In addition to resisting lateral and vertical loads, the moment connection transfers rotational movement at the top of the column where it connects to the beam.

Special Moment Frame requirements include using moment connections that have been prequalified and—unless the system has been proven to perform without it—lateral bracing of the beam. Qualified beam-to-column special moment connections include both bolted and welded types. Be aware that many of the SMF installation stages, such as field welding or bolting, must be witnessed by code officials or building inspectors. Check with the building department to ensure that you stay in compliance.

In addition to MiTek’s Hardy Frame, there are Simpson Strong-Tie soft-story retrofit products, including moment-frame and shear-wall solutions. The Simpson Strong-Tie Strong Frame Special Moment Frame (SMF) is designed for retrofitting large openings, such as garages and storefronts, using I-beam-like components that are bolted together on site. Strong Frame uses a patented Yield-Link structural “fuse,” which is “designed to bear the brunt of seismic forces, thereby reducing the risk of collapse and isolating damage for a less labor-intensive and more rapid post-earthquake repair,” the company states. To learn more, visitwww.strongtie.com/softstory. —JLC

The Hardy Frame SMF is preassembled and welded at the factory, then delivered to the jobsite ready to install. It uses the MiTek SidePlate connection with wide flange columns, and a rectangular Hollow Structural Section (HSS) for the beam. This connection and beam profile typically allow the frame assembly to fit within standard 2x6 framing, and the use of an HSS beam means that additional lateral bracing is not required.

Installation of any moment frame requires column base plates anchored to the foundation, and connection from the frame’s beam to the building using a collector, or “drag,” that delivers the lateral loads. The photos below show a typical retrofit application using the Hardy Frame SMF. 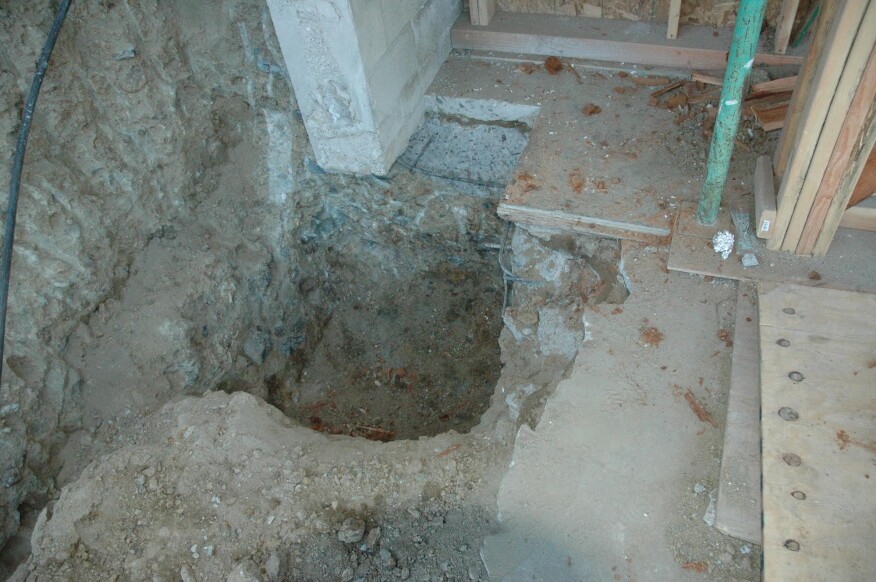 Pad footings. Dig the foundation where the columns’ hold-down anchors will be located. The minimum embed depth, the edge distance from the front and back of the footing, and the distance from the end of the footing to the centerline of the anchor are provided by the moment-frame manufacturer. However, the Engineer of Record may require larger footings. Digging the footing a little deeper not only ensures meeting code for moisture protection, it also makes installation of the moment frame and anchors in retrofit applications easier. 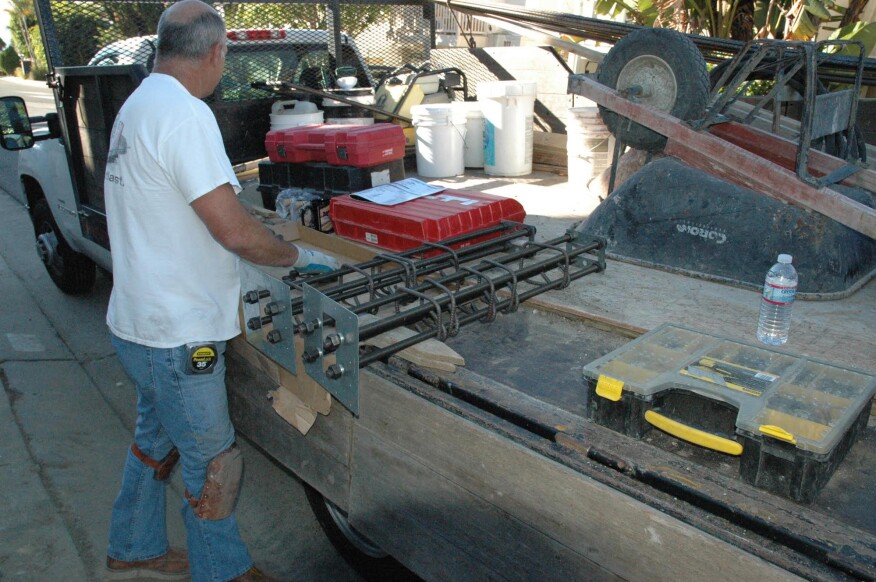 Anchorage. The Template Kit shown includes two Templates, two Bolt Braces, eight anchors with two washers and four nuts per anchor, and rebar shear ties. Anchors should extend 4 1/2 inches beyond the top of the Template. The Template has two slotted holes, one at each end, which are used to measure the inside “steel-to-steel” dimension of the moment frame. When installing the “Bolt Brace” at the embed end, check that the bolt centerlines are oriented in the same direction as the Template. 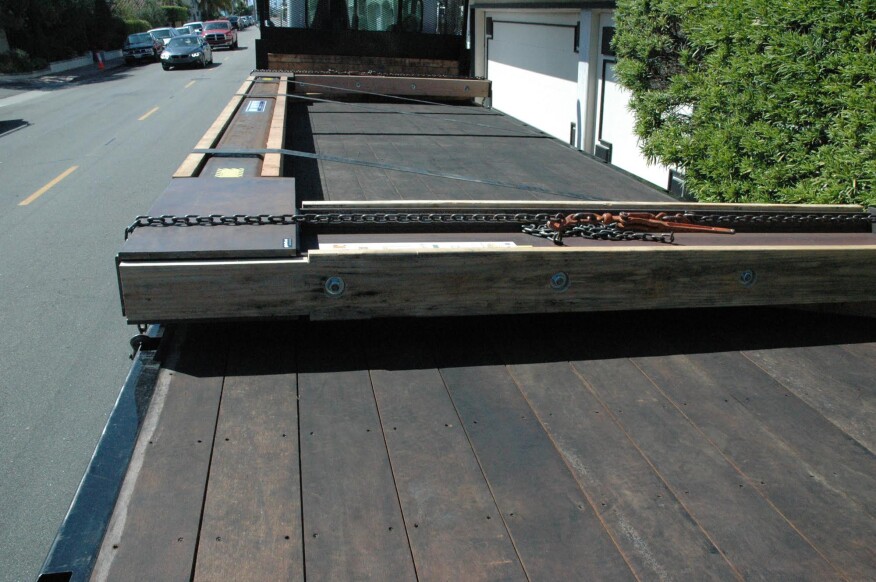 Frame delivery. The Hardy Frame SMF is delivered to the jobsite completely pre-assembled with wood nailers attached. There is no field assembly, no field welding, and therefore no required special inspection for the Hardy Frame assembly. 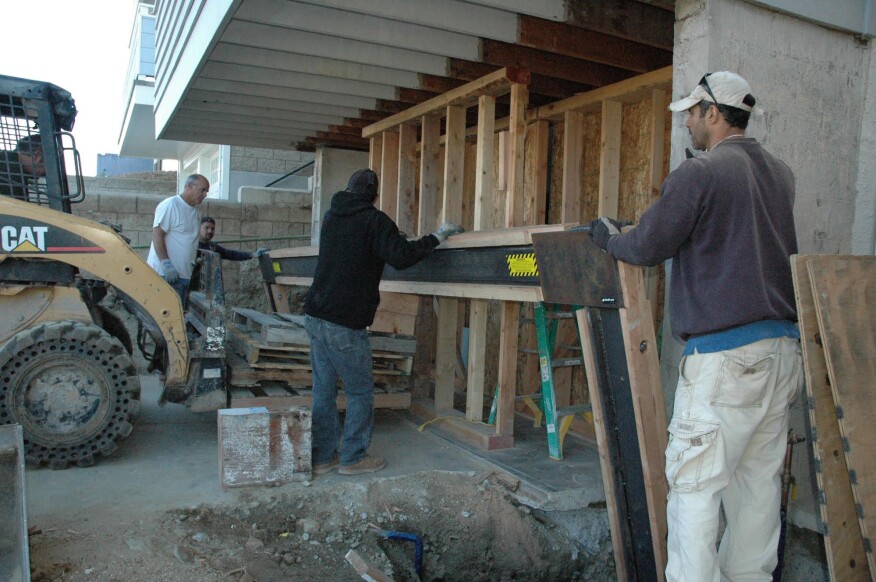 Placement. With the footings prepared and the shoring in place, the site is ready for the installation of the moment frame. Here, the installers have tilted the top of the frame back, away from the building, then moved it toward the point of installation and lowered the column bases into the foundation hole. 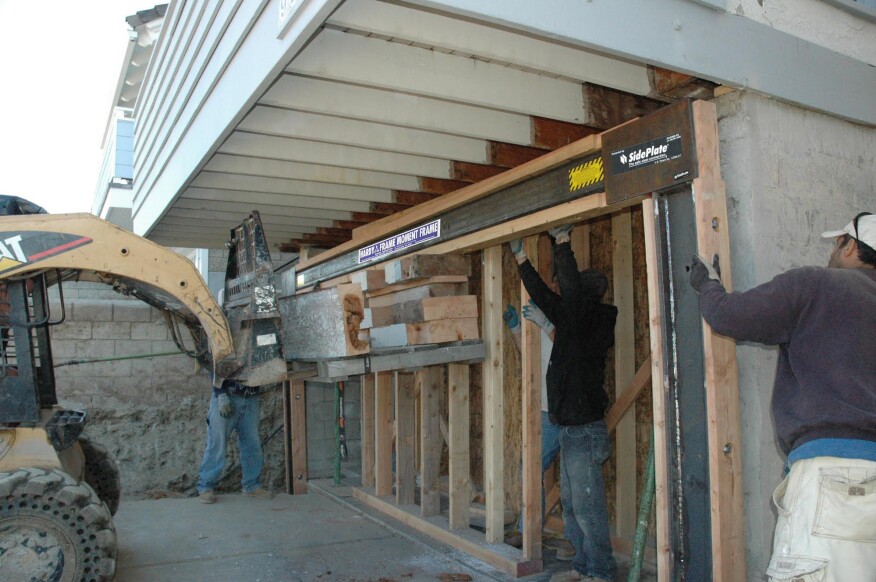 Raising the frame. For retrofit applications with the frame installed within the existing wall line, raise the moment frame until the 3-by nailer on top of the beam is in contact with the building collector. Once the moment-frame assembly is correctly positioned, check that it is plumb and install temporary shoring. 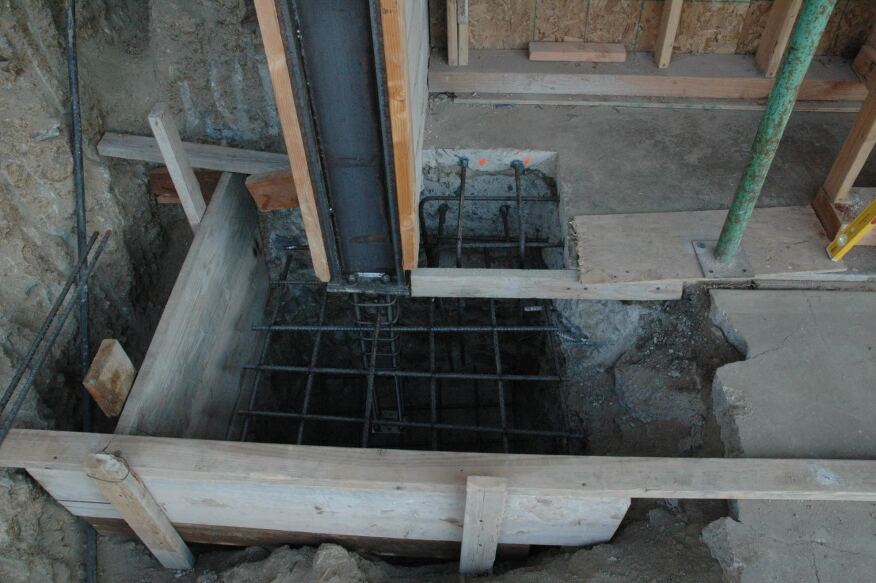 Install anchorage. The anchorage can now be installed at the column base plates and suspended in the open footing. Be sure that the connection has nuts and washers above and below the base plate. The anchors should extend at least one thread beyond the upper nut for easy inspection that all threads in the nut are filled. 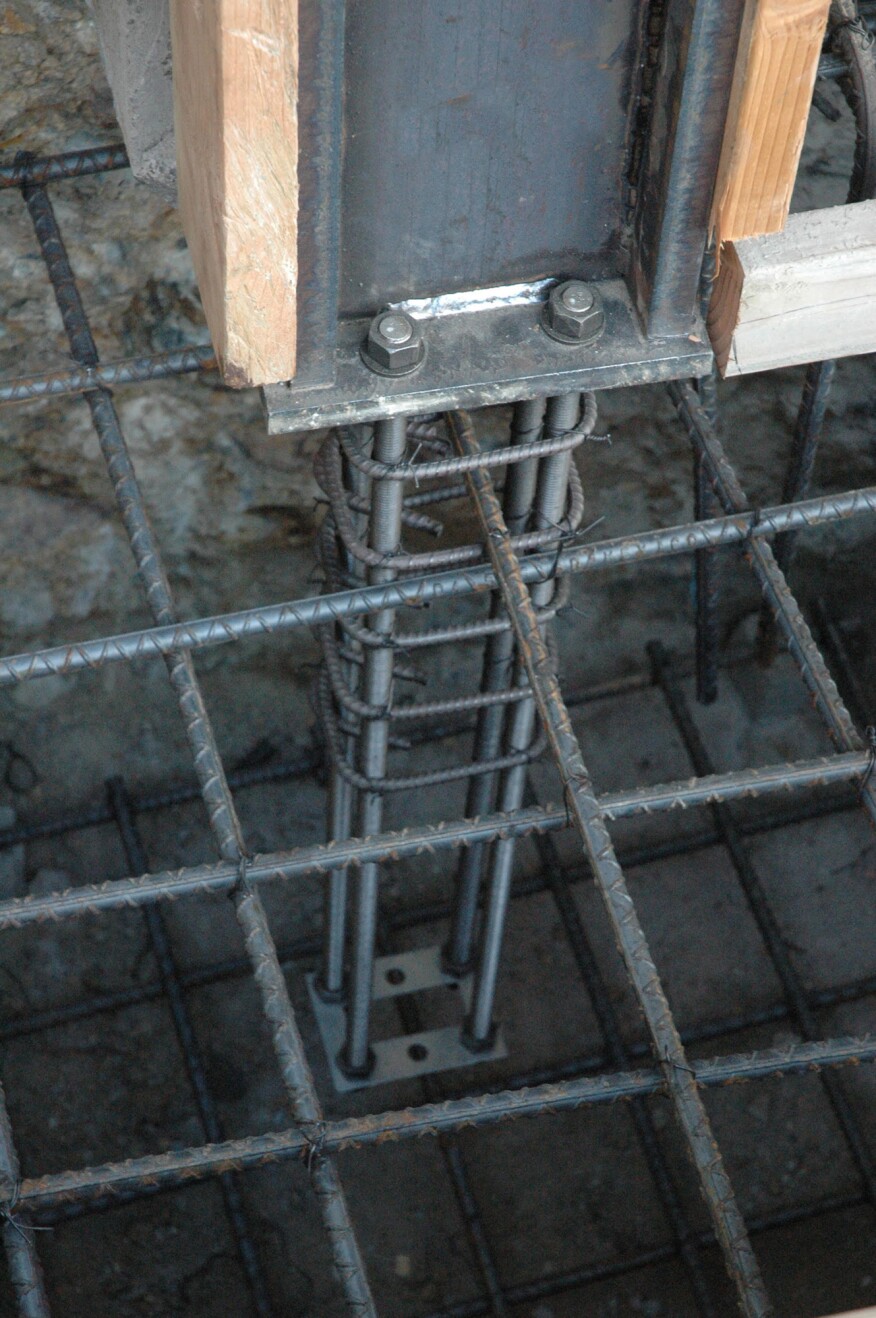 Bolt Brace. A Bolt Brace at the embed end acts as a spreader and ensures the anchors will not sway independently while concrete is being poured, and will keep the anchors parallel and plumb. The rebar reinforcement shown is designed by the Engineer of Record for this project. Be sure to get the anchorage inspected prior to pouring concrete. 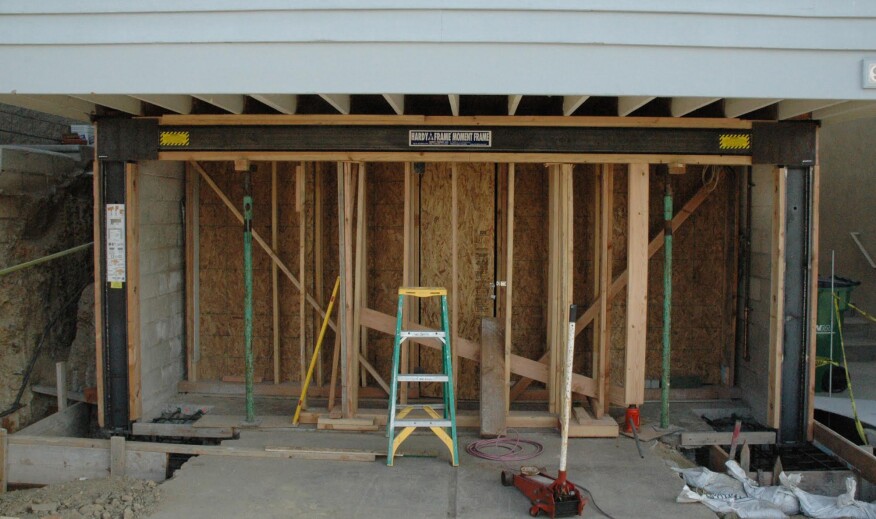 Ready for concrete. In this photo, the Hardy Frame SMF is installed and ready for concrete to be poured at the footings. Connectors to transfer shear from the blocking in the floor system to the wood nailer on top of the SMF beam will be framing angles, as specified by the Engineer of Record. The label shown on the left column provides illustrations of typical bottom and top connections for the installers and the building inspector’s reference.