Labor is a Homebuilder 'Pain-Point' Components Can Solve

Many home builders, large and small, east and west, believe that the financial fate and fortunes of their organizations this year hinge on demand for their new homes this year, but they know it all hinges—at least as much—on supply.

Labor supply--as in a predictable stream of predictably priced hours from craftsworkers and installers, technicians, and trained tradesmen and women—is the challenge 55% of home building company executives named as a pain-point challenge in 2015, according to a newly released analysis for BUILDER developed by its sister-company Metrostudy on behalf of Acme Brick, Johns Manville, Lubrizol, and MiTek--Berkshire Hathaway Companies.

The initial findings, presented initially at last month’s International Builders Show in Las Vegas, preview the introduction in May of a BUILDER Labor Index, a benchmark and heat-map that will pin-point labor constrained areas, by market and by discipline, ongoing research also underwritten by Acme Brick, Johns Manville, Lubrizol, and MiTek--Berkshire Hathaway Companies. 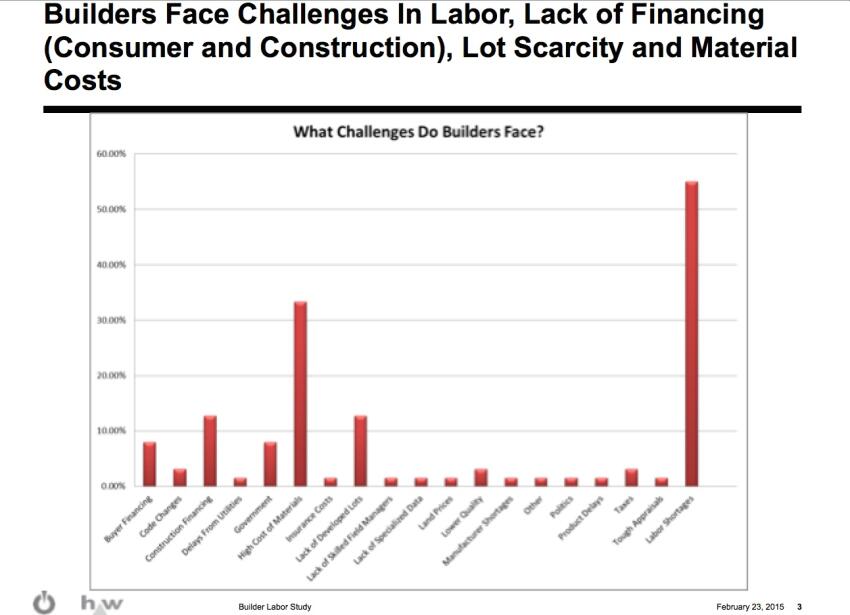 We keep hearing about this labor shortage,” says Toby Morrison, Metrostudy National Sales Manager for Building Products Manufacturers. “But what’s being affected? What disciplines are the big problem? Where is it happening regionally? With what size companies? And then, what can we do to help?”

The initial study data shows that the skillsets builders have the greatest degree of difficulty sourcing are framers, followed at some distance by finish carpentry, drywall, and electrical. The biggest issue when builders report that they’re experiencing labor shortages is the capacity to deliver work on time and on budget, synched up operationally in the work in process cycle for each unit.

“It’s interesting in terms of disciplines we’ve been having trouble with,” comments Morrison on the analysis’ early findings. “Most people would think it’s those that would require a multi-year apprenticeship, but what we’re hearing is that it’s framers, finish carpenters, plumbers, electricians, so it’s really the guts of the house.”

Noteworthy among the pain-point areas, Morrison says, “every single respondent who builds more than 250 homes said that they are having labor problems.” More big builders work to counter the exodus of trade contractors from their jobs with “builder-of-choice” programs that, as Morrison points out, offer “better pay, better, benefits, they’re offering more training, they’re trying to get involved with vocational and tech schools to offer alternatives to career paths that don’t necessarily involve a college degree.” 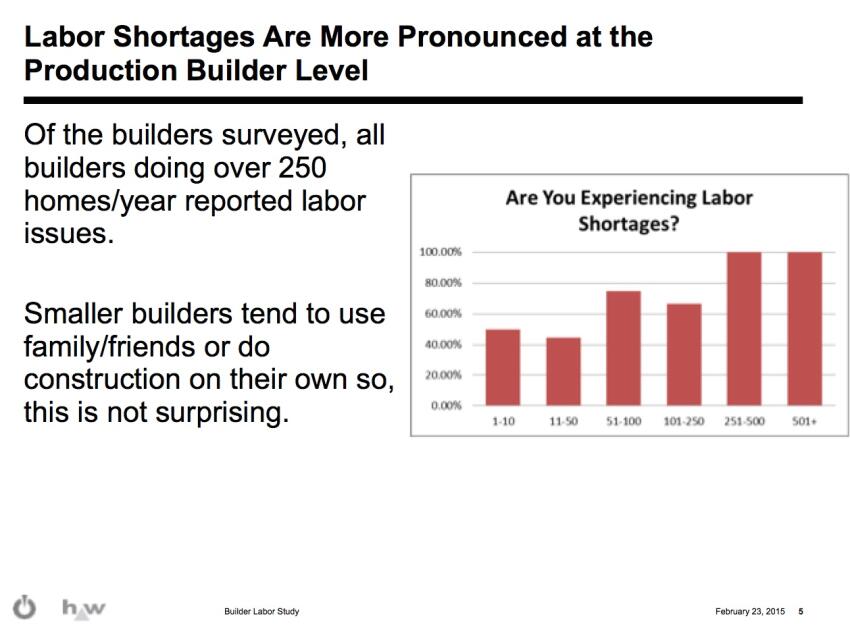 Two consequences go with labor capacity constraints for builders, delayed delivery of the project and higher costs, which translate into a double-whammy negative: lost profitability for a home builder and a higher price tag for home buyers.

Lot constraints, financial capital constraints, and constraints around volatility in the costs of certain materials also figure in as challenging suppressors of builder activity and opportunity, but none figure so prominently as a common denominator challenge as labor shortages. 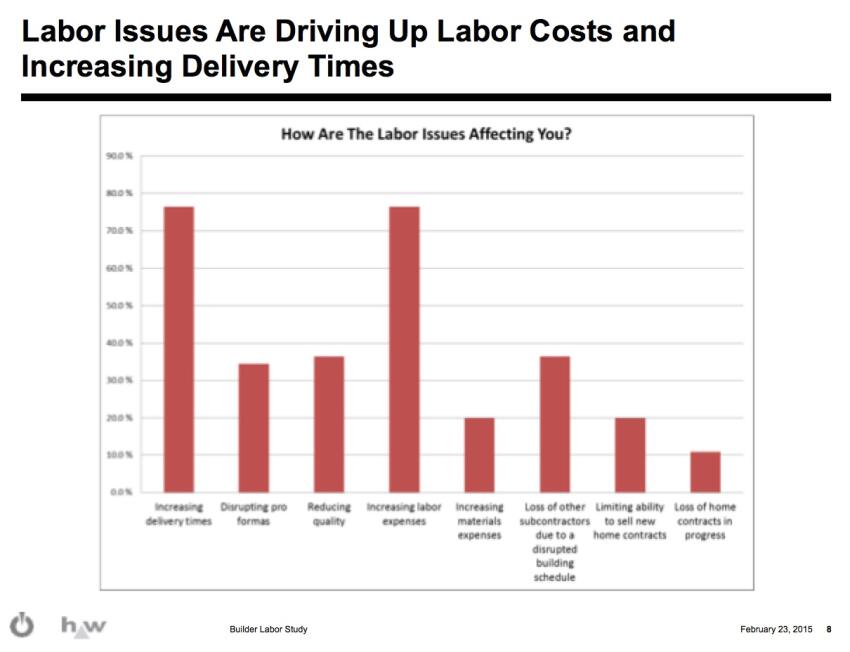 Simply, a supply of new homes at all price points, not just the higher move-up, second-time move-up, and luxury level models that have led the way in the past 24 months of housing’s anemic recovery, is needed to stoke demand. A wave of new homeownership among young first-time buyers can only happen when there’s sufficient supply of homes at the lower-end of the pricing spectrum.

Builders can clear better margins on higher-end homes, so they’re not going to say no to them as long as there’s pull through on them in the marketplace, but that can only last so long—as the past several months of data shows.

This should not come as a surprise. By its last count, the National Association of Home Builder’s analysis of Department of Labor data notes that while residential construction has picked up 433,300 positions since the lowest low point of the housing crash and Great Recession, the total is still some 1.03 million workers shy of peak residential construction employment in 2006.

Fact is, the 1.03 million positions that have yet to return—if they ever do—are disproportionately where the capacity to do lower-cost, higher-velocity “evenflow” production homes that would add the missing dimension of for-sale new-home inventory to the mix.

Many home building companies—with a few noteworthy exceptions like D.R. Horton, LGI and a handful of other public and large private home builders simply shuttered high volume capacity to deliver entry-level homes. Rebooting the operational capacity and scaling the business for another magnitude of volume takes time, risk, and resources, commitments builders are considering now as they find demand for move-up and second-time move-up homes starting to wane without the underpinning of the low-price tier.