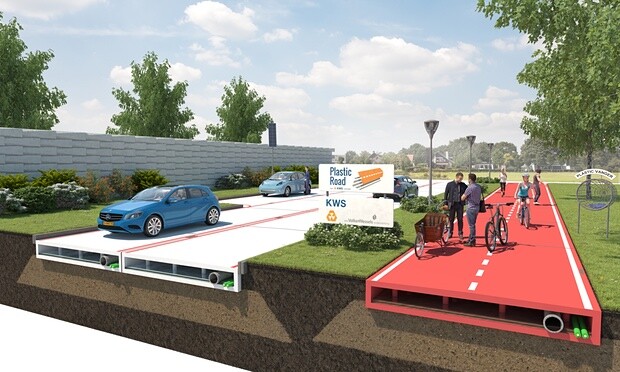 VolkerWessels' PlasticRoad project proposes the development of a road surface made up of recycled plastic. The surface would be a dramatically greener alternative to asphalt (which is responsible for 1.6 million tons of CO2 emissions/year globally), and would also significantly improve the amount of time spent on road construction.

Rolf Mars, director of VolkerWessels' roads subdivision, told the Guardian that the project is still in the conceptual stage, but building a prototype and testing the surface in wet and slippery conditions will be the next step.

"We’re looking for partners who want to collaborate on a pilot – as well as manufacturers in the plastics industry, we’re thinking of the recycling sector, universities and other knowledge institutions," Mars said.

VolkerWessel hopes to have their first road put down within the next three years, and the Netherlands could become the first country to feature a prototype. According to the Guardian, "Rotterdam, a keen supporter of sustainable technology, has already signaled its interest in running a trial."

Outside of the environmental benefits, sections of plastic paving could be prefabricated in a factory and laid in a matter of weeks, cutting down months of road congestion typically caused by asphalt paving or maintenance projects. The recycled plastic surface is hollow, which could also cut down construction time of public works projects, since it would be much easier to install utility pipelines and cables.

Cutting down on carbon emissions and maintenance is only the beginning of the PlasticRoads project. Mars has high hopes for future development, like heated roads that could mitigate harsh weather conditions, or ultra-quiet surfaces.