One of America's biggest lumberyards has begun ramping up promotion of a framing system that it says represents a big advancement in home construction and that some framers applaud, but also has some skeptics questioning whether a majority of framers will embrace it.

BMC's Ready-Frame cuts every piece of wood needed in a home to the size required and then labels and organizes those pieces into packages that are shipped and delivered in the proper order. Each package is accompanied by plans showing what goes where. The result, BMC says, is a framing process that takes less time, wastes less material, and removes opportunities for on-site accidents. Here's a YouTube video from BMC promoting Ready-Frame:

BMC--whose headquarters has moved to Atlanta but which still does most of its business in Texas, the Mountain states, and the Pacific Coast--has been selling Ready-Frame for several years in Washington state and now claims to sell there more Ready-Frame packages than regular framing packages. Only this year is it making a big deal of the system.

In some ways, Ready-Frame isn't much different from the Sears and other kit homes sold a century ago. They also precut and labeled lumber and provided construction plans.  (See graphic at left plus other examples.)  In addition, computer-driven saws that precisely cut and labeled I-joists have been around for at least a decade.

Ready-Frame's proponents say their system differs because recent advances in fast-drying ink-jet sprayers make it possible to put more information on lumber than previously had been possible. In addition, the saw isn't as fancy and computer programming is cheaper, so Ready-Frame's relative costs are more competitive. And once Sears got out of the business, labeling the framing pieces went out of style.

Here are some photos of Ready-Frame in action that I took in January in a model home at BMC's annual meeting in Las Vegas. First, an example of how part of a Ready-Frame package is bundled, in this case for a window opening:

Next, a shot showing labeled pieces of lumber. Only the specially cut pieces are labeled; 2x4s just go where they are indicated:

Another example, this time showing how the area above a window opening would be put together: 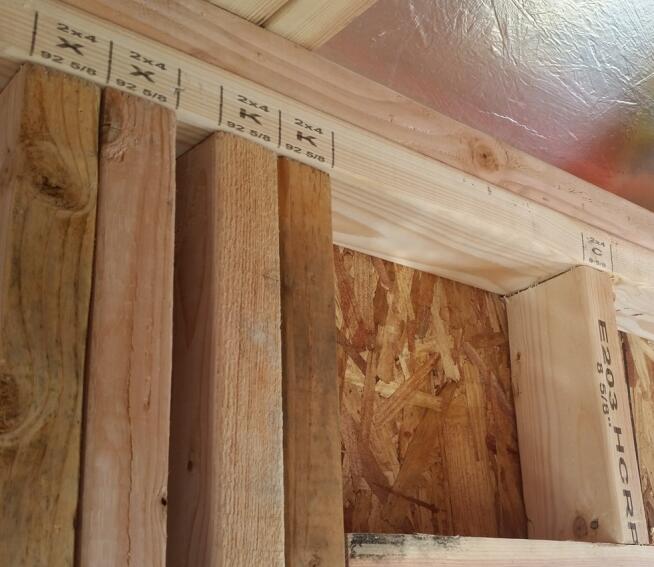 One would think this would be most appealing in a construction environment, but Don Rasmussen, owner of StraitLine Framing in Evergreen, Colo., became an early convert over a year ago even though he only frames high-end custom homes. "On a 3,000-square-foot house it will save us two to five days of production time," he told ProSales. "If it takes three to four weeks to build a house, this will knock off a week." Given Colorado's labor shortage, this is significant, in part because Rasmussen says the system's labeling and charts make projects easier to supervise.

Ready-Frame customers pay BMC a fee for converting a home's plans into the company's proprietary software and and then cutting and organizing the lumber into the right packages. Rasmussen said that expense is countered by savings on production and on waste. "Our material waste has gone from maybe 7% to 8% [of the total lumber delivery] to under 5%," he said. "That’s a big deal. Some of the houses we do are 12,000 to 20,000 square feet." And clients like Ready-Frame because that reduced waste "keeps pricing tighter."

Not everyone is so upbeat. When first told about Ready-Frame, several housing production experts contacted by ProSales said framers historically have earned some of their money by charging a homebuilder more lumber than was needed to put up a house and then pocketing the difference. Ready-Frame removes that advantage. In addition, the skeptics said the production savings reaped in a place like Seattle are unlikely to impress companies with far cheaper labor markets, like Houston or Dallas.

"I think that the West Coast makes sense [as a potential market] as they will be able to find plenty of good sized and professionally run framing companies who can be convinced to train their crews to use the system as it will save them time and money," one analyst said of BMC's initiative. "This works particularly well in a turnkey (framer provides labor and material) environment. In a market where the framer provides only labor and the builder purchases the materials, it will be a much more challenging rollout, especially in markets where the framers are smaller and less organized."