The nation’s largest energy user, the Department of Defense (DoD), is host to a project that demonstrates best practices for reducing a building’s carbon footprint and lowering demand for energy and water.

The dynamic roofing system, installed at the Security Forces Building at Goodfellow Air Force Base in San Angelo, Texas, uses a combination of technologies that heat and cool air and water, produce electricity, and collect rainwater. The system could be replicated at thousands of DoD buildings throughout the country in the near future, according to a press release. The technology could also be applicable to new and retrofit homes and multifamily developments. 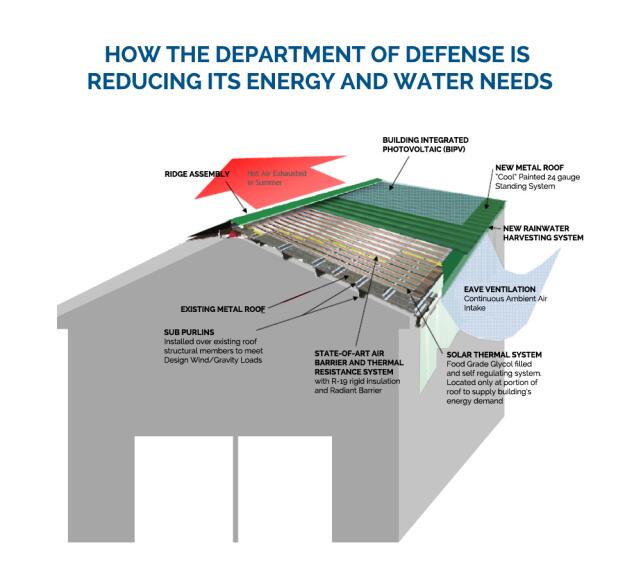 The unique system brings together multiple functions in one holistically designed, integrated building envelope system that can be used on flat or sloped roof designs. Because the metal roof system can be installed over an existing roof, it can save on installation costs and keep old roofing material out of landfills, according to the DoD.

A retrofitted metal roof is installed over the existing roof, which creates a cavity between the existing and new roofs. Within that cavity insulation, solar thermal heating systems and cooling of air and water for the building can be installed. The roofing, insulation, hydronic solar thermal systems, engineered air pathways, and photovoltaic cells are designed to work symbiotically.

Other benefits of the system include: