Building a new home for better protection against severe weather is possible, but building codes in the United States are not geared for extreme weather events such as tornadoes, according to Haag Engineering Co. Structural Engineer and Meteorologist Tim Marshall.

Marshall has conducted hundreds of damage surveys after severe weather events across the U.S., and he is also a storm chaser.

"Building codes in most of the country do not include designs for wind above 90 mph," Marshall said. "The four factors for building codes include wind gusts up to 90 mph and a three-second gust at 10 meters or 33 feet in open terrain." 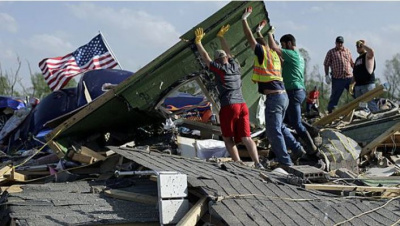 The community of Moore, Oklahoma, changed their building codes after losing more than 1,000 homes to an EF5 tornado in 2013; however, there are no building codes in the U.S. implemented to prepare for tornadoes.

The country lacks building codes for tornadoes because they are isolated and the general population may not witness one in a lifetime, Marshall said.

"That's the baseline, but tornadoes are not included in building codes as they are an extreme event," he said. "Odds are, you can just build a house and it will live out its life of 50-100 years - that's for the vast majority of buildings and (building codes) are not intended for tornadoes."

Residents must assess their own well-being and how to ensure the protection of their property.

Having a properly certified safe room with a proper door installed is important for safety in an area that is prone to extreme weather events, Marshall said.

The National Storm Shelter Association is the organization that approves and certifies safe rooms for quality.

Marshall said that some of the same measures in building for hurricane reinforcement can be utilized when building in areas prone to severe weather, including tornadoes.

Improving the overall stability of a structure relies on the importance of clips. Clips are required to secure the wall studs to the wall bottom and top plates.

"Every component is like links in a chain; failure will occur at the weakest link," Marshall said. "These clips are being made, and they can be 10 to 20 times stronger than a nail."

It's easier to pull a nail out than it is to shear a nail, he added, citing a strengthened connection by not nailing straight in, but on an angle due to the clips.

Wind pushes on a house laterally and lifts it from its foundation.

"It's two opposite forces," he said.

Building is mostly done to resist gravity or dead loads to prevent people from getting crushed. A home can be built more securely using clips and solid sheathing to strengthen the overall structure, he said.

Strong anchor bolts should be used to attach the bottom plate to the concrete foundation, but since many counties do not have building inspectors and sometimes include their own variances, some structures are not bolted down properly, he said.

During his surveys, Marshall said he hardly saw the use of anchor bolts in certain areas along with a lack of connected walls and plates.

"We're seeing a lot of this unfortunately, the use of cut nails (hammered into a concrete slab)," he said. "These houses blow down rather easily."

Solid sheathing or wood siding is also essential in creating the box-shape of a home, providing better support to the structure.

This will not affect commercial building codes.

"It has nothing to do with commercial which is separate: Commercial construction is done through engineers and that is up to the individual owners of the properties, but residential codes, we still do," Ebrey said.

In March, Moore's city council voted unanimously to bolster and upgrade building requirements to make sure that homes can withstand up to 135-mph winds instead of 90-mph winds.

"I don't think we're taking anything [rebuilding materials] and making it new; we're taking it to the next level," Ebrey said. "It's about showing where to use those brackets and where to use those braces. I think for a long time, there was the thought of keeping the roof on and using straps, but there are other points within the home building process that you can use these elements to connect portions of a home to another portion."

"Builders say people want the lowest price, but I think an educated consumer wants options," he said. "Even safe rooms are coming down in price."

Wooden siding once provided extra support, but vinyl siding, which is commonly used today, is for decorative purposes so it distributes no load to the structure.

"I stress building a better home," Marshall said. "It's worth it, putting some money to build a better house. We live in an age where we have great technology, and we still build houses like we have in the past."

Building codes were made stricter in Florida after Hurricane Andrew in 1992, Marshall added, but older homes are just as susceptible as they always were.

"Codes are for the new and the future, not for the past," Marshall said. "It's tough to upgrade an existing house. I would say you would probably be better off spending that money on a storm shelter if you live in an older home."

Posted on May 27, 2014 in Building Codes, Housing & Construction